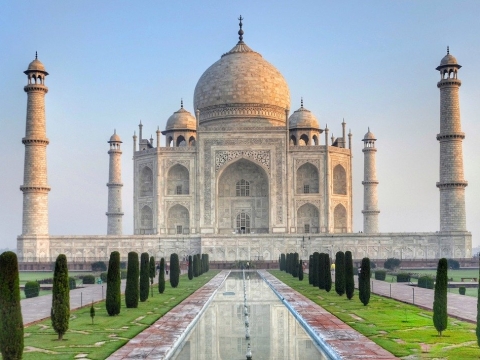 Magnificent, stunning, bewitching, sublime – words fail to describe this exalted labor of love that stands on the southern bank of the Yamuna river. One of the most astounding examples of Mughal architecture, the Taj Mahal is swathed in immaculate, ivory-white glory, a resplendent bulwark of precision and symmetry. Constructed by the grief-stricken emperor Shah Jahan after the death of his beloved consort, it's hard to believe that the gigantic edifice is actually a mausoleum that houses both of their tombs. The iconic structure has been constructed entirely out of marble and features outstanding artwork, including the stunning marble inlay work that is interwoven with precious and semi-precious stones. Calligraphic inscriptions from the Holy Quran surround the beautiful vaulted archways. The edifice, flanked by four pillars, has been constructed in perfect symmetry and appears identical from all the sides. At the absolute center of the monument lies the cenotaph of Mumtaz Mahal and beside hers, emperor Shah Jahan's, which was added later. The edifice was declared a UNESCO World Heritage site in 1983 and is one of the most recognized monuments worldwide. 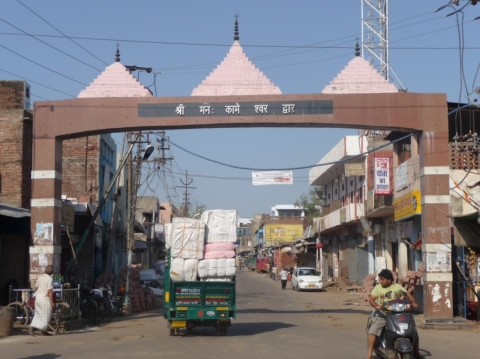 Believed to be established by Lord Shiva more than 5000 years ago, the Mankameshwar Mandir is a famous place of worship for Hindus. A bustling market surrounds the temple with shops selling sweets and garlands which are offered to the deity. The actual temple is relatively small and is accessible by a fleet of steps as it is located lower than the ground level. A magnificent silver Shivalingam (symbolic representation of Lord Shiva), which can be seen from the entrance, is at the center of the temple. Smaller shrines of several Hindu deities such as Ram, Krishna, Hanuman and Narsimha occupy spaces in the complex and are also worshiped. One of the best times to visit the temple is during the evening aarti (a worship ritual) which is done amidst much fanfare. Follow the surge of devotees heading towards the temple, in case you are lost in one of the narrow lanes spread across the vicinity. 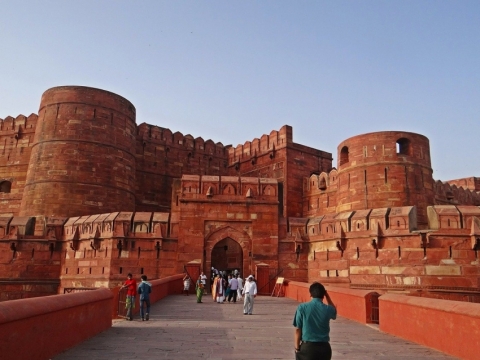 Often named in the same breath as the Taj Mahal, this landmark structure is fortified by 21-meter (70-feet) high walls, part of which skirts the river Yamuna. The Agra Fort gained prominence during the reign of Emperor Akbar and Shah Jahan. The fort's complex gives a great view of the majestic Jahangiri Mahal, dwarfing everything else surrounding the palace. The smooth contours of the Taj Mahal are hard to be missed from the Khas Mahal and Musamman Burj, that is only if you can take your eyes off the splendid polished color stones and gems that beautify the structures. Diwan-i-Khas, Diwan-i- Aam, Anguri Bagh and Machhi Bhavan are other historically important structures that are also the holders of the Mughal legacy. As a part of it is occupied by the Indian Army, entry to certain parts of the fort is restricted which thereby cuts the chance for visitors to view the magnificent Delhi Gate and the iconic Moti Masjid. If the white marble wonder is the royal symbol of an emperor's love for his wife, then the Agra Fort surely lives up to its status of a royal fortress. Built in such gigantic proportions, it is practically impossible to capture the fort in a frame from any one side. 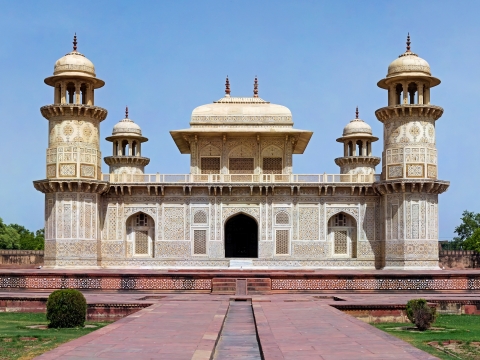 Few structures in Agra can match up to the Taj Mahal in beauty and splendor. The tomb of I'timad-Ud-Daulah counts as one of them. Built between 1622 and 1628, the beautiful tomb was commissioned by Emperor Jahangir's wife, Nur Jahan in memory of her father Mirza Ghiyas Beg. The title I'timad-Ud-Daulah, meaning pillar of the state, was given to him for his exceptional services to the state. The magnificent tomb is one of the first Mughal monuments to be constructed entirely from white marble and is one of the hallmarks of the change in Mughal trend of using white marble instead of red sandstone. The tomb sits in the middle of a Mughal garden flanked by ornamental gates on all sides. Sterling floral inlay artwork adorns the structure. A marked difference between the artwork on this tomb and that of the Taj Mahal is the high amount of geometrical and meaty inlay work with Iranian influences as against the delicate floral patterns on the Taj. The structure, also known as the Baby Taj and considered as a pre-cursor to the Taj Mahal, is a monument of immense beauty and a must-visit site. 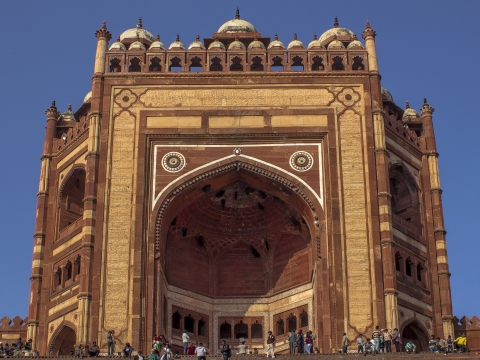 The period of Mughal reign in India was marked by splendid architectural advances, as emperors, pursuing their love of art and architecture, constructed ambitious monuments and cities. The ancient city of Fatehpur Sikri is one such site. Meant to replace Agra Fort as the capital of the empire, it was built in the honor of Salim Chishti, a Sufi Saint who had correctly predicted the birth of emperor Akbar's son, Jahangir. The city's status as the capital was short-lived however, as the emperor had to move the capital back to the Agra Fort after 14 years due to water scarcity in the region. The abandoned city is a veritable treasure-trove of historical buildings and provides a glimpse into the extremely-meticulous planning and building skills of the Mughals. Some of the prominent buildings within the complex are the Diwan Khana-i-Am, the Panch Mahal, the colossal Buland Darwaza, the beautiful Khwabgah, the magnificent Jodha Bai's Palace, the Jama Masjid and also the tomb of Salim Chishti. The site of the ancient city was declared a UNESCO World Heritage Site in 1986 and is an intrinsic part of a visit to Agra. 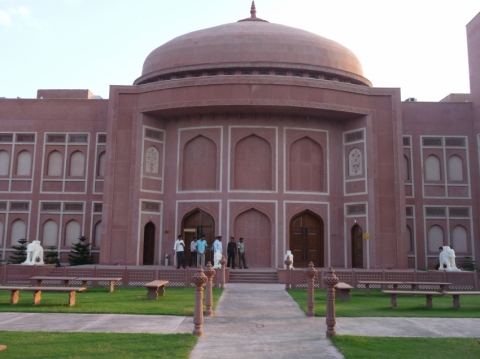 Head to the Kalakriti Cultural & Convention Centre to catch up on some of the happening cultural events in Agra. Concerts, traditional dance shows, drama and exhibitions are a regular feature here. The auditorium has a seating capacity for 585 spectators, and the events held at this international convention center attract a number of tourists as well as locals alike. Call or visit their website to know more about latest events. 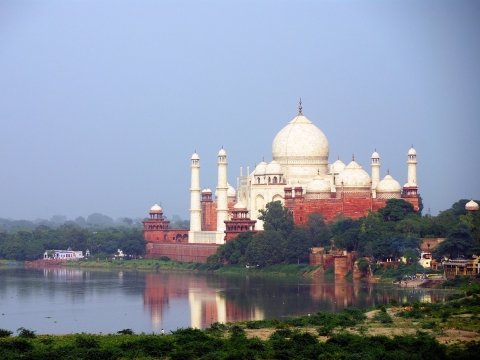 If Delhi is regarded as one of the oldest cities in the world, and Jaipur as the land of Rajput Maharajas, then Agra could be described as the city that witnessed the opulence of the Mughals. A part of the Golden Triangle of North India which includes Delhi and Jaipur as the other two cities, Agra is one of the major tourist destinations in the world. The city owes this status to the presence of three UNESCO World heritage sites, namely, the Taj Mahal, Agra Fort and Fatehpur Sikri, which were built during the peak of the Mughal reign. Sikandra, Tomb of I'tmad ud Daulah and Chini ka Rauza are also tagged with tremendous heritage value and shouldn't be missed. The city displays its multi-cultural facet during the time of festivals of Dusshera, Diwali and Eid which see its transformation from a touristy place to an ethnic charmer. Bustling markets, crowded streets, and insistent touts are the few salient traits one would encounter in an Agra sojourn; however, it takes nothing away from this unique city. The best time to visit Agra is between the months of November and March which are cooler than the rest of the year. 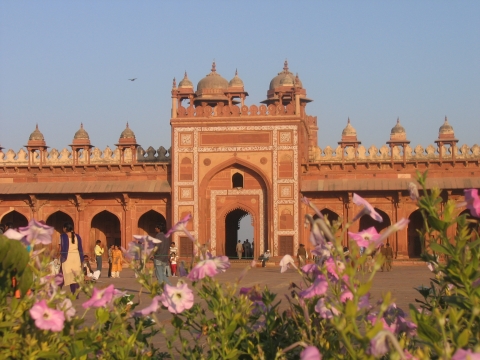 Surrounded by the bustling Subhash Market and located at a five-minutes walk from the iconic Agra Fort, Shahi Jama Masjid was built by the daughter of Mughal Emperor Shah Jahan - Princess Jahanara, in 1648. As you enter the premises of the mosque through a flight of stairs, you will notice the resemblance of the mosque's architectural pattern to some of the structures built around the same time. Preceded by a huge courtyard with a fountain at its center, the mosque is a red sandstone structure marked by three bulbous domes decorated with meandering marble pattern on each of these domes. A series of beautiful Chhatris (umbrella) made of marble and sandstone can be seen on top of the facade of the mosque and its chambers. The interior of the mosque is beautifully decorated with inlaid stone work, carvings and paintings. Also known as the Friday mosque, the Jama Masjid experiences a large crowd on Fridays for prayers. Visitors to the mosque are expected to remove their shoes and cover their head with a cloth before entering the premises. 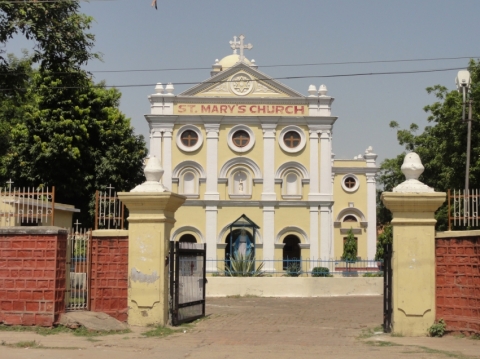 Dressed in a bright coat of yellow and white, the regal church building hardly looks like it was built in 1923. Located on the Ajmer road, the historic St. Mary's Church was a gift from an affluent Agra family to the locals who were hoping for a church in the vicinity. The church is actively involved in various initiatives for social upliftment. 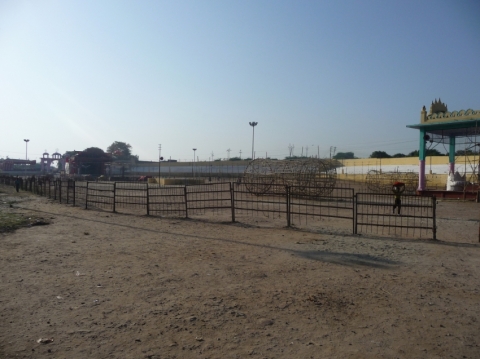 Named after the Ramleela event that takes place during the Hindu festival of Vijay Dashmi, the Ramleela Ground is located at the southern entry point or the Amar Singh Gate of Agra Fort. Thousands of people turn up to watch the dramatic recital from Ramayana (Indian epic) which culminates with the burning of a huge effigy of Ravana (the demon king) on the tenth day amidst much fanfare. A number of social, political and cultural events are also held on this ground which can accommodate more that 5000 people at a time. Expect a huge crowd if you plan to visit the ground during festivals and other events. 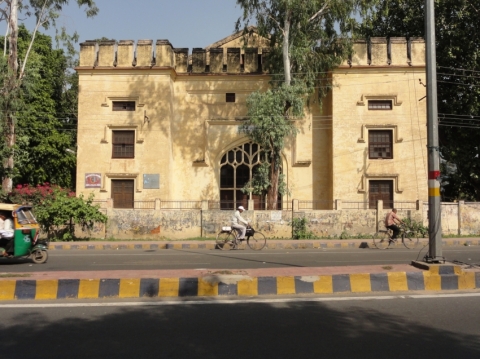 Established in 1823, the Agra College is steeped in history and is one of the oldest educational institutions in India. Currently affiliated to the Dr. B. R. Ambedkar University, the college offers degrees in a multitude of subjects ranging from psychology and languages to political science and engineering. The institution has had a significant impact in the educational sector and is well-known for giving the first graduate in the state of Uttar Pradesh.

Believed to be established by Lord Shiva more than 5000 years ago, the Mankameshwar Mandir is a famous place of worship for Hindus. A bustling market surrounds the temple with shops selling sweets and garlands which are offered to the deity. The actual temple is relatively small and is accessible by a fleet of steps as it is located lower than the ground level. A magnificent silver Shivalingam (symbolic representation of Lord Shiva), which can be seen from the entrance, is at the center of the temple. Smaller shrines of several Hindu deities such as Ram, Krishna, Hanuman and Narsimha occupy spaces in the complex and are also worshiped. One of the best times to visit the temple is during the evening aarti (a worship ritual) which is done amidst much fanfare. Follow the surge of devotees heading towards the temple, in case you are lost in one of the narrow lanes spread across the vicinity. 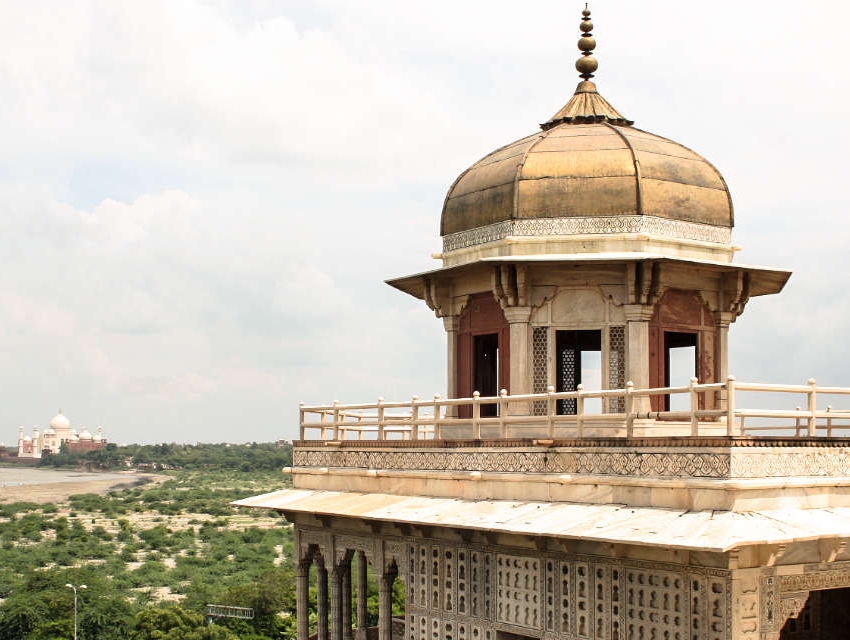 A Day in Agra

Top Things To Do in Agra 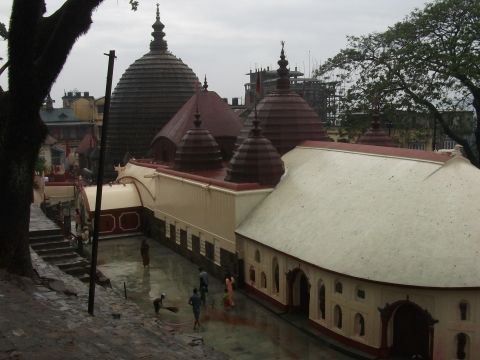