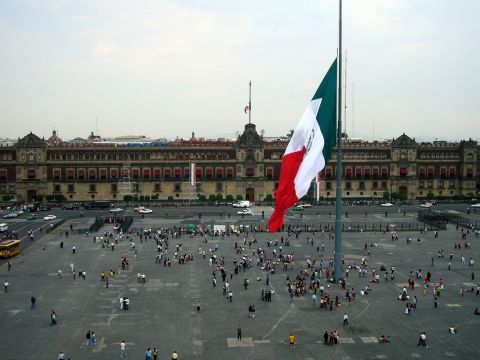 The Plaza de la Constitución is one of the world's largest city squares and is the main plaza of Mexico's Federal District. Paved by Cortés is the 1520s, the expansive plaza lies at the site of the ceremonial center of the Aztec Tenochtitlán. For a time, the plaza was taken over by a labyrinth of stalls, until General Santa Anna cleared the square and laid the foundations of a monument to independence at its core. His plans were never realized, however, and the base of the proposed monument was eventually buried. What remains, is the name Zócalo, meaning "plinth," a moniker popularly used to refer to the Plaza de la Constitución as well as the main squares of several other Mexican cities. Here, Aztec dancers perform daily to the beat of drums, beneath the massive Mexican flag fluttering in the breeze, hoisted each morning by soldiers at 8a and lowered again at 6p. The grand historic facades of the Palacio Nacional and Catedral Metropolitana fringe the square; a place where the pulse of the city beats the strongest. The Plaza de la Constitución also hosts concerts, festivals and protests amid its sprawling embrace. 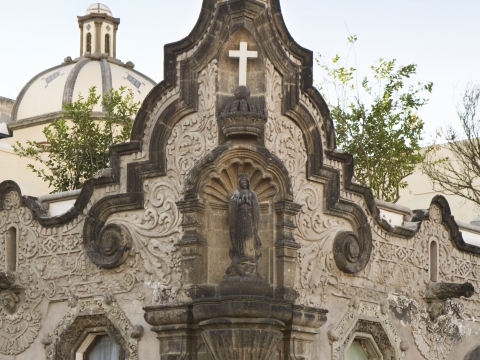 Centro Histórico is a heritage quarter in Mexico City and home to some of its finest architecture. This UNESCO World Heritage Site was once the power center of both the Aztec Empire and New Spain and preserves their unique architectural legacies. 1550 structures in this neighborhood have historical value and exhibit architectural styles such as Art Deco, Beaux-Arts, Italiante and Baroque. A walk through the streets reveals diverse buildings dating from the 16th to 20th Centuries and a plethora of museums. Famous structures here include the Palacio Nacional and the Catedral Metropolitana. This locality also encompasses the Zócalo or the Plaza de la Constitución, Latin America's largest city square. It is the perfect place for those looking to soak in old-world Mexican culture. The best time to visit the Centro Histórico is during the Festival del Centro Histórico, a celebration of culture. 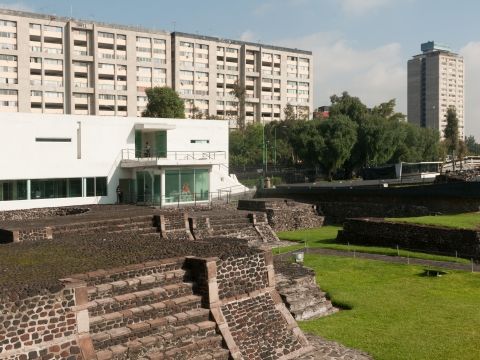 Inaugurated in the year 1966 and designed by well-respected urbanist Mario Pani, the Plaza de las Tres Culturas sits in the heart of the Tlatelolco locale of Mexico City. The name of this plaza is derived from the fusion of Mexico's three main cultural epochs: pre-Hispanic, colonial, and present-day, and it offers elements taken from all three historical periods. The first is represented by the ruins of an Aztec ceremonial site, while the second one was the Santiago Tlatelolco Church built in 1609. Last but certainly not least, the modern age is personified by the Ministry of Foreign Affairs and was constructed in 1970. The plaza's southern end also houses a stone monument that was erected in honor of the victims of the Tttaleoloco Massacre that occurred on the 2nd of October 1968. Together, all of these monuments symbolize the vagaries of time and help preserve the culture and history of the city. 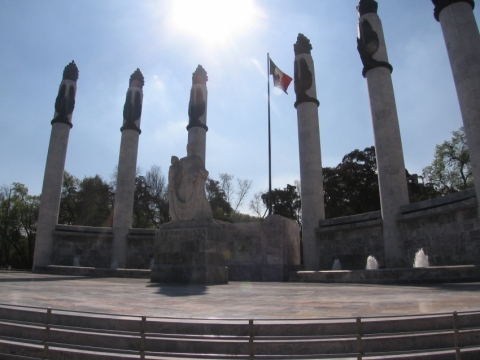 Situated at the main entrance to the Bosque de Chapultepec, this monument was designed as a semicircle of six columns, each representing the brave young cadets who died during the invasion of U.S. troops in 1847. The youthful cadets were stationed at the Castillo de Chapultepec, which served at that time as the national military academy and died in one of the most tragic and emotional moments in Mexican history.