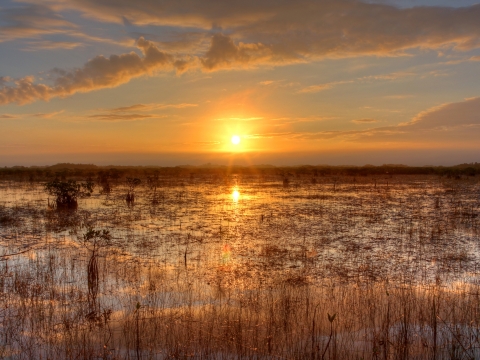 Home to a seemingly endless labyrinth of subtropical wetlands, Everglades National Park shelters a peculiar ecosystem within its enormous expanse. Stretches of the park's lush swampland feature a network of mangroves and robust breeding ground and habitat for an array of wading birds and varied wildlife. Its dark, tropical depths are shrouded in grassy rivers and dense marshes that are home to the famed American alligator, West Indian manatee, hundreds of aviary species, and the elusive Florida Panther. Tropical hardwood hammocks form ideal shelters for the reptiles, while wet prairies with their brackish water support the growth of succulent plants like glassworts. While modern concerns like global warming and surging sea levels loom as considerable threats to the park's fragile ecosystem, the Everglades continues to be a constant source of beauty and wonder for all who visit. 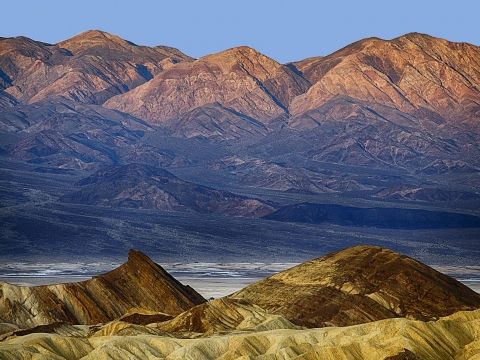 Death Valley National Park is famed for its extreme arid temperatures. While it's difficult to believe much can survive the sweltering temperatures up to 120 degrees Fahrenheit (49 degrees centigrade), the park's desert wildlife proves otherwise. Home to the Bighorn Sheep, Coyote and the evergreen creosote bush, the desert changes through the seasons and offers up a burst of colors in spring when the wildflowers bloom spectacularly. Top scenic spots include Zabriskie Point, overlooking the sci-fiesque multi-hued Furnace Creek; otherworldly Twenty Mule Team Canyon and the badlands, and the desolate Mesquite Flat Sand Dunes. 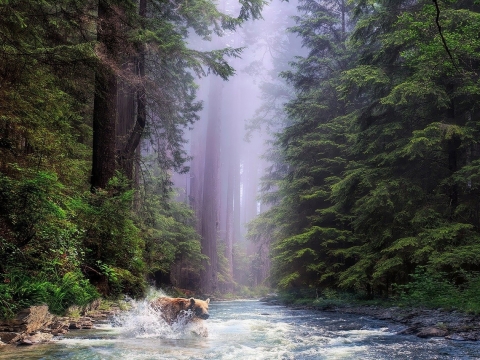 A gargantuan grove of trees that shoot from the slopes of the Sierra Nevada mountains depict nature's unfathomable beauty. Named after the towering resident trees that dwarf every other being in its unencumbered swathe of wilderness, Sequoia National Park is home to a warren of wonders. Cliffs of the Sierra Nevada compete with the beauty of the General Sherman tree, the largest tree on Earth. While the front country of the park is largely cloaked by blue oak woodlands and mild river valleys, where the elusive mountain lion basks in the morning sun, the back country is characterized by an astonishing expanse of trails like the High Sierra, only accessible by horseback. A host of soul-stirring alpine journeys await hikers who strive to traverse the tapestry of trails. 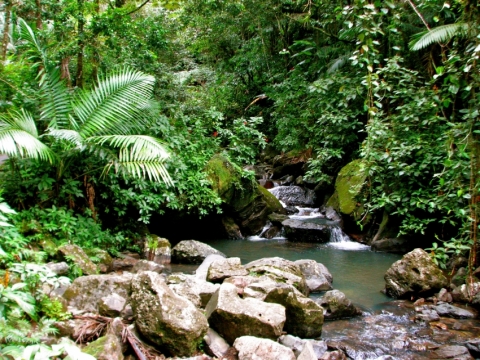 One of the oldest protected areas in the Western Hemisphere, this pristine expanse of El Yunque National Forest comes alive with lush rainforests, a diverse wildlife, and ancient Puerto Rican myths. The rainforest ambles up the steep slopes of the Sierra de Luquillo mountains, until it reaches an anvil-like peak that looks out onto the vast tropical wonderland. Its thundering depths are home to a rich wildlife that survives in a humid sub-tropical climate, while its warm corners are blessed with nearly 200 inches (5.08 meters) of average rainfall every year. The forest resounds with the croaks of the vibrant coqui tree frog and the fabled Puerto Rican parrot, two endemic species that live within El Yunque. Once believed to be the home of the local deity Yuquiyú, the El Yunque National Forest is home to eight large rivers that originate here, and nearly 25 waterfalls of various shapes and sizes that cascade down from craggy edges. 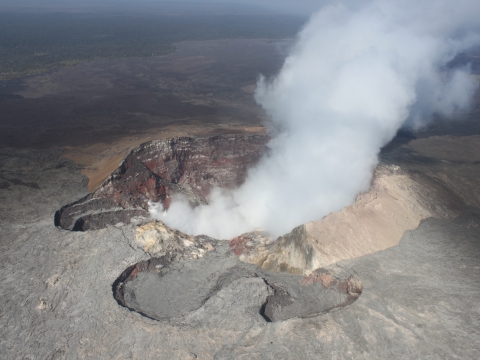 Rising above the sea with its top brushing the clouds, this active peak is one of earth's largest volcanoes. The sheer size of Mauna Loa adds to its allure. Covering almost half of the island, its steep slopes flank the ocean floor. Comprising one of the five volcanoes that constitute Hawaii, it is located within Hawaiʻi Volcanoes National Park. Carved by molten magma and dotted with cinder cones, this great massif formed eons ago is featured in local folklore. A dazzling landscape of rolling lava, black rock and forested slopes makes this a geological beauty that attracts people from far and wide. In winter, the volcano is sheathed in a snowy garb, creating a spectacular panorama that captures the imagination.