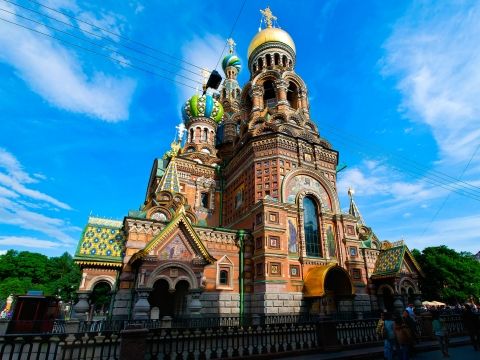 Dedicated to Tsar Alexander II, whose rule marked the beginning of a liberated livelihood for enslaved serfs, the Church of the Savior on Blood commands undivided attention with its location on the Moyka River embankment. The beautifully ornate church was built on the same spot where the beloved Tsar was assassinated by revolutionaries in 1881, and as an ode to the Russian ruler, the church's granite-paneled facade tells a riveting story of Alexander II's dutiful reign. Studded with exquisite detailing, gleaming cupolas, and a facade awash with a splash of colors, the church's unique architectural style sets it apart from St Petersburg's other, less theatrical structures. The cathedral is lavishly encrusted with a dazzle of semi-precious stones like topaz, crystal and jasper, all set on a paneling made of Italian limestone. Within the church, casting a mellow glow over the prayer hall, the roof is adorned with a tapestry of frescoes and mosaics, based on paintings of Vasnetsov, Nesterol and Vrubel. Spread over an area of more than 7500 square meters (80,729 square feet), the mosaic collection is deemed to be among the largest of its kind in all of Europe. The Church of the Savior on Blood is emblematic of unbeatable hope following a trying time in Russian history, a symbol that took nearly 24 years to build. 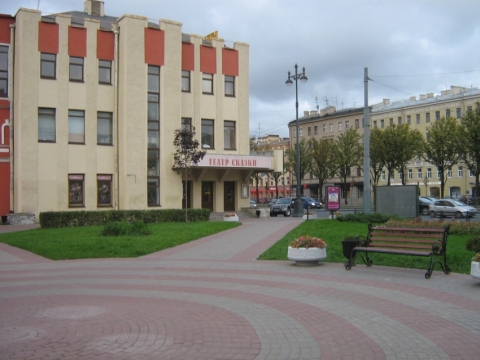 Created for and mainly addressing children, the Puppet Fairy Tale Theatre was founded by actresses Yekaterina Chernyak, Yelena Gilodi and Olga Lyandsberg in 1944. The first show took place on 31 December, and this anniversary is celebrated annually with a new premiere. The theatre has 24 shows in its repertoire, from various corners of the globe, and they are known for their innovative design, with actors interacting with puppets on stage. The company consists of 20 actors, four of which are Merited Artists, and has toured all over the world. Its directors are rightfully considered the country's best puppet masters. Please call or check the website for details of current performances. 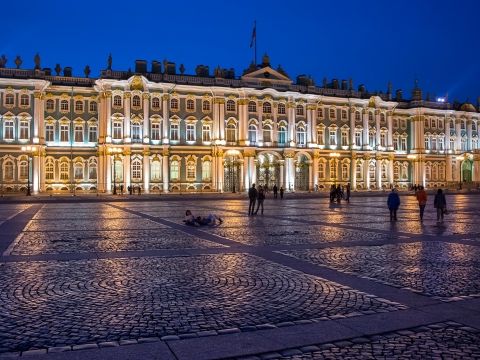 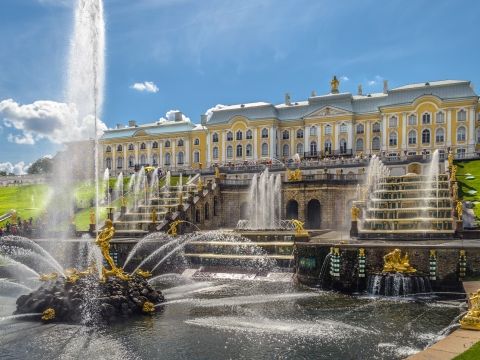 Peterhof Palace is the epitome of Russian Imperialism with its architectural splendor and the sheer magnitude of the complex. Facing the Gulf of Finland, the sea-front gargantuan complex, often called "The Russian Versailles" is replete with several smaller palaces and gardens. Peter the Great planned to construct a palace fit for his royal status in 1705 and it was accomplished by 1725. Additions to the palace were made in the latter years around the 1750s. A royal world in itself, the premises can be studied intricately for a plethora of architectural styles and nuances. Broad pathways lined with vibrant flower beds and hedge labyrinths are spread out on multiple levels. Known for its extraordinary range of fountains, the complex boasts of more than 60 fountains cascading into gleaming waterways. The symmetry of the extensive gardens was inspired by the French and Dutch Baroque gardening style. The most opulent of all palaces, the Grand Palace acts as a centerpiece of the complex. Staircases and balusters ornamented with golden figurines can be seen leading into the palaces. A melange of Neoclassicism and Baroque, even the smallest details evoke awe. Monplaisir, Peter the Great's summer palace, is a charming Dutch-style mansion with red gable roofs and sweeping vistas of the sea. An architectural magnum opus and a UNESCO World Heritage Site in Russia, tourist, and locals fall short of words praising this wonder. 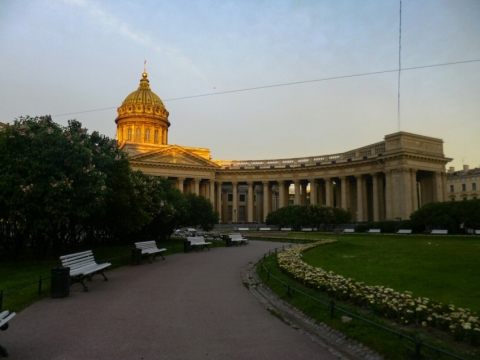 During a ten year period (1801-1811), master builder Andrei Voronikhin oversaw construction of this majestic semicircular colonnade that still stands guard on Nevskii Prospekt. Called the Kazan Cathedral, the structure's 96 Corinthian columns are reminiscent of St Peter's in Rome and were the only aspect of the cathedral that survived from the original design formulated by Paul I. A symbol of Russia's triumph over Napoleon, the monumental building is home to the Museum of the History of Religion. 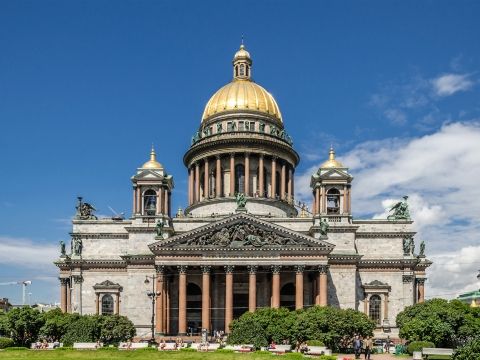 During the first half of the 19th century, around 11,000 serfs drove 25,000 wooden planks into the ground, creating the foundation for what would become Isaakievskiy Sobor or Saint Isaac's Cathedral. More than 100 kilograms (220 pounds) of pure gold were used to gild the dome and its 112 polished granite support column. The massive interior is constructed from various types of marble and stone, and it is designed to accommodate up to 14,000 people. Construction of the cathedral was a painstaking process, taking 40 years in total, and architect August Ricard de Montferrand passed away shortly after its completion. Now, the golden dome has commanded the Neva River skyline for nearly 200 years. From the 562-step climb to the circular observation deck unparalleled panoramas of St. Petersburg await. 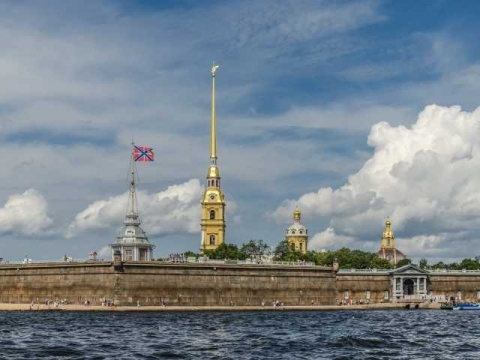 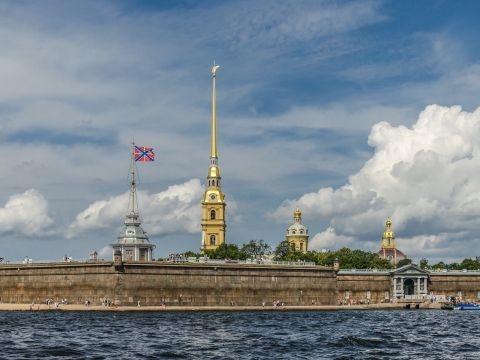 Second to Moscow only in size, St Petersburg is no less dazzling than the Russian Federation's capital. The city's historic center is a freeze-frame of its illustrious history as the nation's imperial capital, its picturesque canals lined with Italianate mansions giving way to stately plazas with neoclassical and baroque gems. It is St. Petersburg's palaces and cathedrals, however, that best capture its glorious past, most notably the Palace of Peter I, the city's founding father, and the Church of the Savior on Spilled Blood. Built on the banks of the Neva River where it empties into the Gulf of Finland, the city's shore is lined with attractive beaches. There are gardens and amusement parks too, as well as zoos and other family-friendly attractions. A veritable paradise for art lovers, St. Petersburg's thriving arts scene is defined by the extensive collections of the Hermitage, Russian Museum and the Street Art Museum, alongside its numerous art galleries. The best time to visit is during the Summer White Nights when the city comes alive in a seemingly endless celebration of the glorious weather, with art festivals galore and superb performances around every corner. There's always something to see and do here, no matter the time of the year, as the scene morphs from the snow-dappled whimsy of winter to the vivid hues of autumn and the fledgling verdant spring.

Alexander Column, is a mighty Doric column, cut from a giant granite monolith with a bronze base, cap, bas-reliefs and a sculpture on top, was put on Palace Square in memory of victory in the war of 1812. The huge granite monolith weighs 704 metric tons. It took 2000 soldiers and 400 workers just one hour and 45 minutes to complete the construction of this monument. The column itself has a height of 25.58 meters (83.92 feet). It is the highest triumphal column in the world.

Located in the heart of St Petersburg, a number of historical monuments, statues, palaces, parks and highways together form the Historic Centre of Saint Petersburg and Related Groups of Monuments. Featuring different architectural styles such as Neoclassical, Baroque and Russian-Byzantine, the city is frequently referred to as the 'Venice of Russia' and extremely popular among tourists. It was designated as a World Heritage Site by the United Nations Education, Scientific and Cultural Organization in the year of 1991. 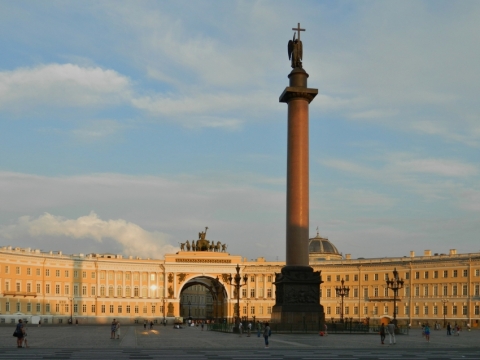 Flanked by the imperious Winter Palace on one side and the sweeping majesty of the General Staff Building on the other, the decadent Palace Square is one of the world's most impressive inner-city expanses. Like Red Square in Moscow, this open area has been an integral witness to a series of events which mark the historical timelines of Russia. In 1905, the square endured the ‘Bloody Sunday', when confused palace guards opened fire on peaceful demonstrators, whereas during the October Revolution, it was from here that the alleged "storming" of the Winter Palace was launched. Dominating the heart of the square is the soaring, granite-built Alexander Column, which was built to commemorate Russia’s liberation from the shackles of France. Having been instrumental in carving out the historic and revolutionary discourse of the country, the square, now, stands as a vital venue of many significant cultural events of the city. 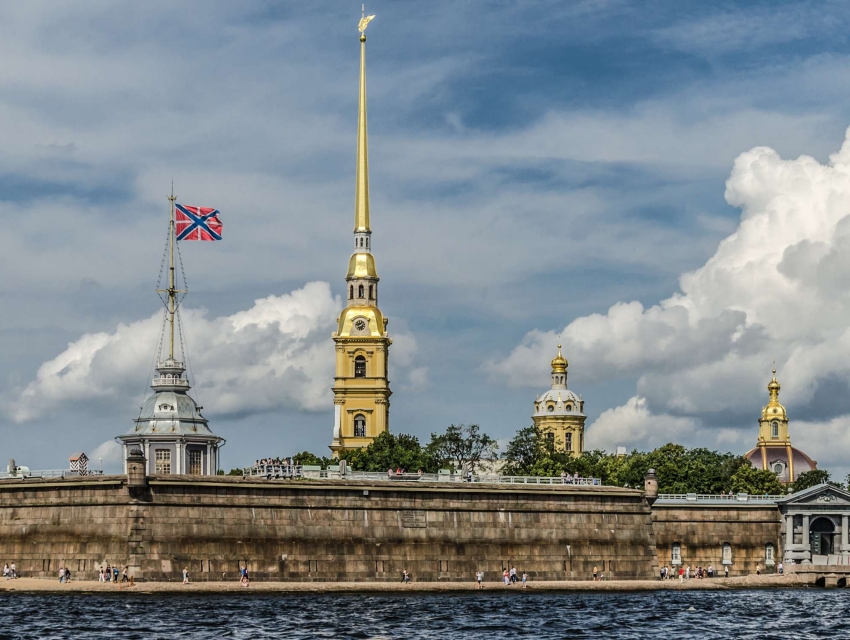 A Day in St Petersburg 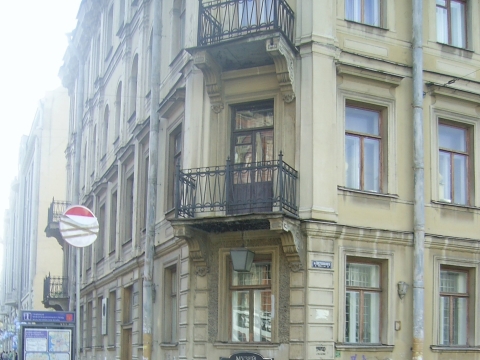 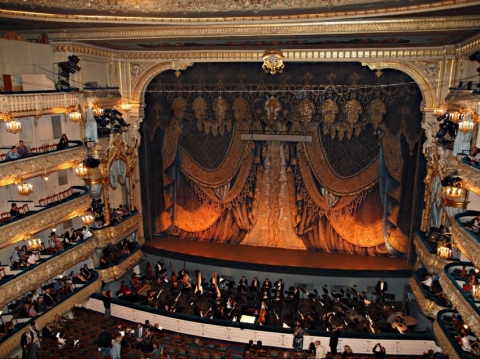 Top Things To Do in St Petersburg