You will be compelled to stop in your tracks when you see the Toronto's Half House on the St Patrick Street. A 19th-century, Victorian structure with just one-half visible, the other half of Toronto's Half House was torn down in the 20th Century by a real estate company. Owning to disputes between the owner and the development company, this house was torn in the most awkward fashion while its neighbor's building was being demolished. Sliced exactly in half, the wall that you see was a division separating the bedrooms. Legal tiffs aside, this place is a must-visit if you wish to spot something eccentric and capture it on your camera's lens.

At Yonge and Wellington, between Scott and Church, is an historic triangle of bricks and mortar known locally as the Flatiron Building. Also known as the Gooderham Building, it used to be home to the corporate offices of the Gooderham and Worts Distillery empire. A mirror image mural of the Perkins Building located across the street, painted by renowned Canadian artist Derek Besant, adds color to an already remarkable structure. The pub in the basement is a popular haunt, and features a massive outdoor patio that overlooks one of the richest architectural areas of the city. Today this building is home to Gilbert's LLP, lawyers and patent & Trademark Agents. 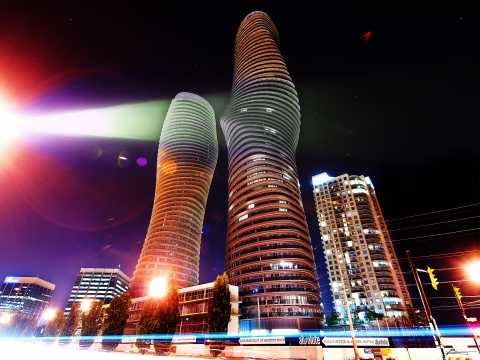 A landmark for the 21st Century, the Absolute World complex is an eye-catching addition to Mississauga's skyline. Following an international competition among several design firms, the winning Beijing-based MAD firm won the bid. Known for its unique twisting architecture, the towers spiral from base to top in a dizzying pattern, with the larger tower twisting at 209 degrees from the bottom of the building. Interestingly, the towers have been labeled 'Marilyn Monroe' by locals due to its voluptuous hourglass shape.