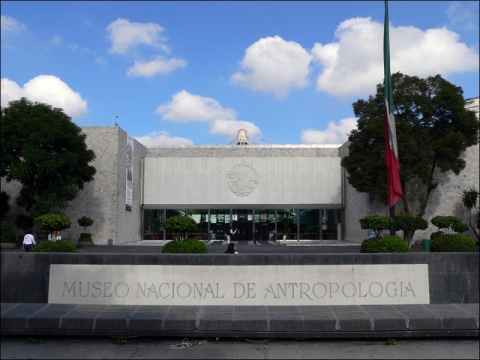 A treasure chest of pre-Columbian history and Mexico’s cultural heritage, the National Museum of Anthropology is a defining historical landmark of the country. Located on the bustling thoroughfare of Paseo de la Reforma, the museum complex is one of the most architecturally evolved in the city. Dotted with gardens and ponds, the monumental umbrella-like structure forms the centerpiece of the complex. Home to some of the most precious relics from Mexican history, the 23 rooms along with outdoor gardens display insightful artifacts from even other parts of the world. The monolith Aztec Sun Stone and carved stone statues of Aztec deities are the most visited exhibits in the museum. Accurate replicas of tombs and temples from Mayan civilizations are indisputably some of the most breathtaking displays. The largest and one of the most elaborate museums in the country, the National Museum of Anthropology is considered a national symbol. 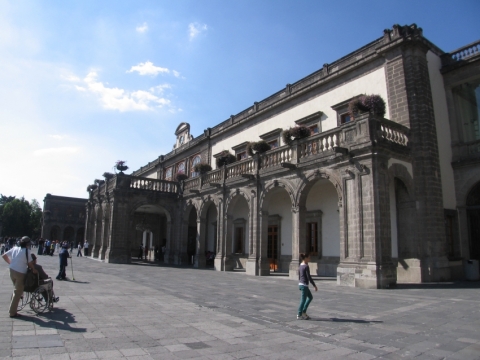 Castillo de Chapultepec was built between 1780 and 1790, constructed on top of an Aztec fortress with panoramic views of the city. The gardens surrounding the palace were designed by Empress Carlota during the French occupation and offer a beautiful stroll. It once served as the Colegio Militar (Military Academy) and was also the official presidential residence until 1939, when President Cárdenas converted the palace into the Museo Nacional de Historia. Restoration efforts have significantly enhanced the construction as well as the design of the interiors. 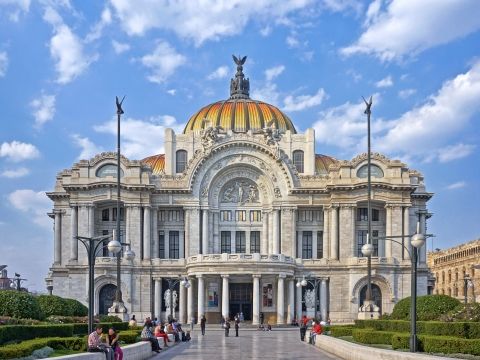 A rich Art Nouveau facade offset by an opulent Art Deco interior characterizes the grandeur of one of Mexico City's most notable cultural landmarks, the Palace of Fine Arts. Radiant in its Carrara marble facade that glints under the sun, the building's resplendent dome is its zenith, a crystal-hewn structure that dazzles in ombre shades of yellow and orange. The building, built partly by architects Adamo Boari and Federico Mariscal, was envisioned as a celebratory landmark to commemorate the centenary of the Mexican War of Independence. Though plans for the building were laid as early as 1904, its construction ceased abruptly in 1913, owing to political and structural impediments. The building's construction was suspended for 20 years, only to begin again in 1932. This time, Federico Mariscal undertook the task and completed the building's construction in 1934. Since then, this revered landmark has been Mexico City's cultural nerve, having hosted everything from opera and dance to music, literature and art events in its seasoned span. Its mural-clad walls are home to the National Theater, the National Museum of Architecture and the National Institute of Fine Arts. 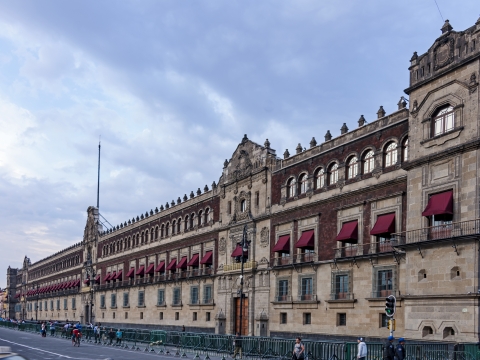 A rambling, majestic structure built from earth-hued tezontle rock, dominates the expanse of El Zócalo in the heart of Mexico City. Hernán Cortés, the conqueror of Mexico, built this government palace in 1693 on the very same site where the legendary Moctezuma II's residence once stood. The Palacio Nacional that we see today is almost an identical twin of its old self except for the building's ornately-decorated topmost floor that was added in the late 1920s. The structure's interiors are even more impressive; housing a spectacular selection of vivid and figurative murals by Diego Rivera. While his collection of murals is enormous, the "Epic of the Mexican People" mural is by far the Palacio's centerpiece which manages to artistically condense nearly two thousand years worth of history onto the space of an enormous wall. The palace also houses a small museum dedicated to Benito Juárez and the Mexican Congress and is also where the National Archives and Federal Treasury offices are located. 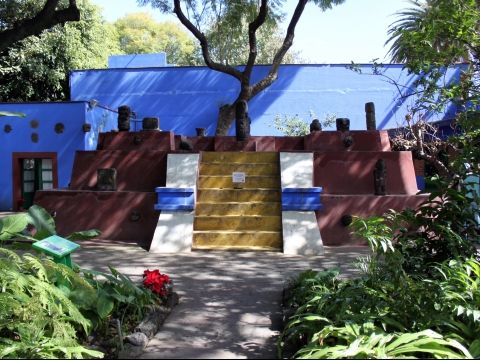 A leafy enclave in Coyoacán preserves behind vivid blue walls the legacy of one of Mexico's most iconic artists, Frida Kahlo. Known as the iconic Casa Azul, or Blue House, the Museo Frida Kahlo was the birthplace of the enigmatic painter Frida Kahlo, who also occasionally lived here with her husband Diego Rivera. One of Mexico city's most recognized attractions, the house contains everything from her personal belongings such as jewelry, and unfinished canvases propped on easels, to her traditional tehuana dresses. The museum is lavishly divided into ten rooms, each a splendid glimpse into the artist's extraordinary work and life. Each room takes one on a riveting journey of Kahlo's life that she shared with her artist husband Diego Riviera, from rooms that once rung with animated soirées hosted for their artist friends, to rooms that still hold regional handicrafts that adorned their home. Other exhibits include paper maché skeletons of Judas and pre-Hispanic objects, as well as Kahlo's wheelchair, on display in the studio where she once regularly painted. The house museum spills into a sun-drenched courtyard lined with trees, burning bright with an inspiring legacy left behind by one of the country's brightest and most creative minds. 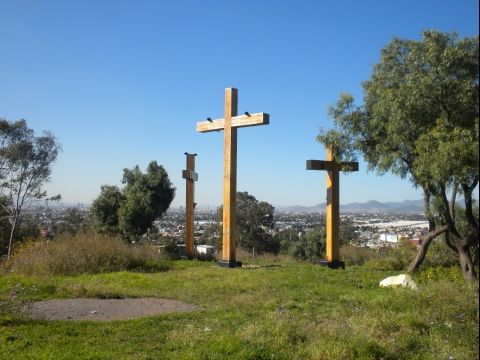 At the end of each period of Xiuhmolpilli, every 52 years, the Aztecs celebrated the ritual of Fuego Nuevo or "New Fire", a sun renewal ceremony on the peak of Cerro de la Estrella. On the flanks of these rocky slopes, overlooking Lake Texococo, the city of Iztapalapa was founded. However, long before the Aztec colonization of the Valley of Mexico, the hill attracted other groups. The first agricultural communities date back to 1000 BCE, and around 900 BCE the first constructions of Teotihuacana influence appeared. The Chichmecan founded the capital of the Culhacán kingdom, which was finally swallowed by the Aztec empire. Since 1998, this fascinating archaeological area has been graced by an equally interesting museum and the Cerro de la Estrella is now classified as a National Park. 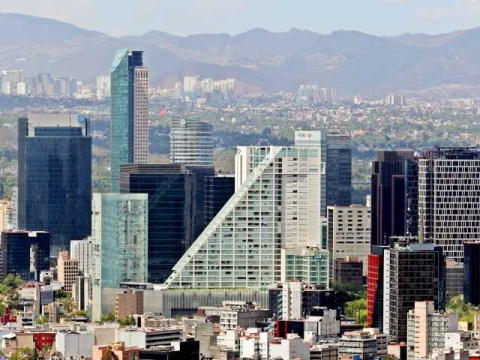 Talavera is a charming pedestrian street at the heart of the city's historic center. As you stroll down Talavera you will encounter quaint boutiques, intriguing statues and colorful houses bedecked in traditional tiles. Street fairs, markets and festivals bring the street to life with music, laughter and the happy chatter of revelers beneath colorful banners. Talavera is just a short walk away from La Merced market, Museo de Sitio Talavera and Plaza Juan Jose Baz.

This small museum, located in one of the busiest commercial sectors of the old city center, offers visitors an insight into a crucial part of Mexico's history. The period before the arrival of the Spanish is depicted on one floor; on another, the colonial era, illustrated by letters and objects dating from that time; and the hectic modern age is represented on a third floor. Visitors can also see exhibits of Mayólica pottery, commonly known as Talaveran pottery, their Asian and contemporary counterparts, glazed pottery, and early Mexican fine ceramics. The collection brings together examples from the 16th to the 19th centuries. 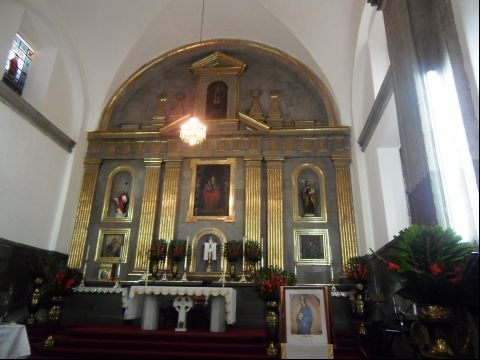 Nestled in the heart of Mexico City, this magnificent temple was originally established in 1553 as a dedication to Santo Niño Perdido. In 1667 it was reconstructed as the Templo de Nuestra Señora de Balvanera; it included the church and a convent on site. During the 1800s, the convent was razed to the ground, but the church survived the political turmoil in the city. Reflecting beautiful baroque architecture, this church features a tiled-bell tower. 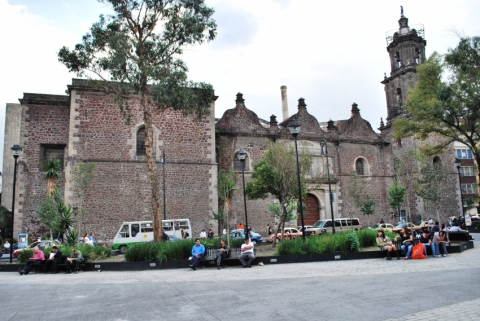 No other church, apart from the city's cathedral, can boast such a varied history and such valuable contents as this one. This Baroque seventeenth century church, shelters in its chancel the remains of the Spanish conqueror Hernán Cortés. After being identified in 1946, the remains were left to rest in their original sepulcher. The interior includes a fresco by the celebrated Mexican muralist José Clemente Orozoco; this was one of the last major works by this early twentieth century artist.

Located on the flat roof of the Museum of Mexico is the former studio of this 19th century Mexican painter. Clausell was an impressionist strongly influenced by Monet, and you can see more than sixty square metres of his murals, the result of the artist, somewhat fortuitously, cleaning his brushes on the surrounding walls. As a consequence he left behind a fusion of landscapes, nudes and faces for the onlooker to decipher. Admission is free of charge. 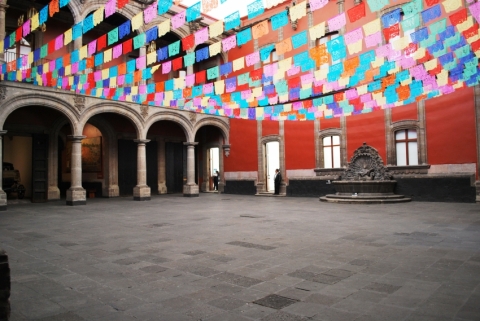 The 27 halls comprising this 18th Century colonial palace offer an insight into the urban development of the city of Mexico through maps, paintings and photographs on exhibit. The room on the upper level displays murals painted by the Mexican painter Joaquín Claussel. Among the many highlights found here is a large wooden door of intricate carved detail, including the coat of arms belonging to the Counts of Santiago de Calimaya. A presumably pre-Hispanic serpent's head, fashioned in a large stone, juts out from the building towards the corner of República del Salvador. 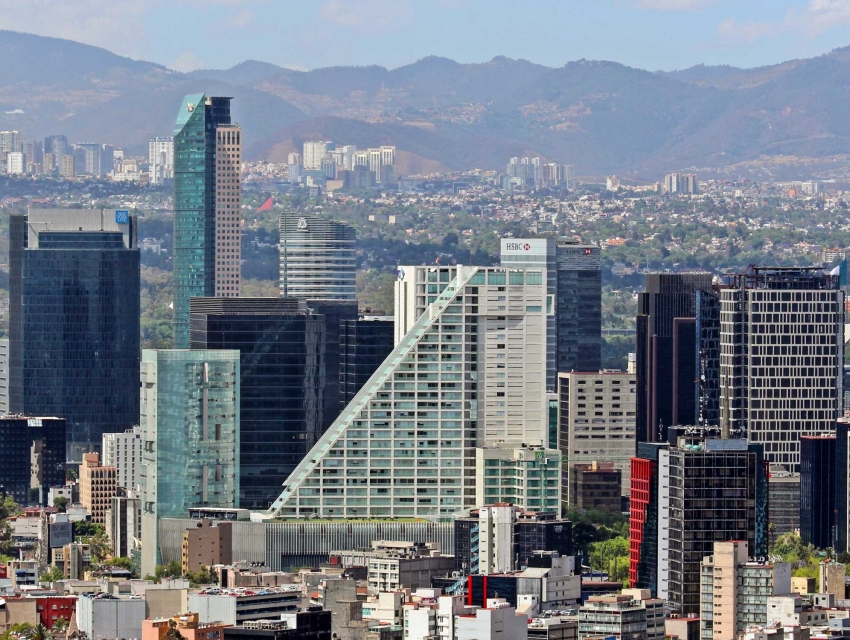 A Day in Mexico City 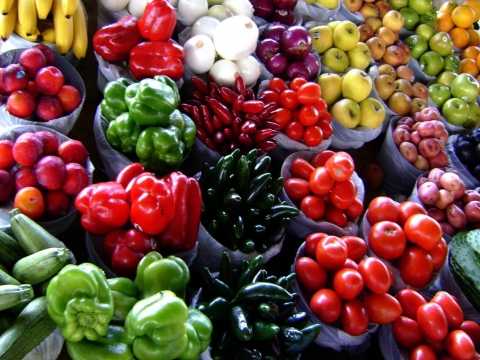 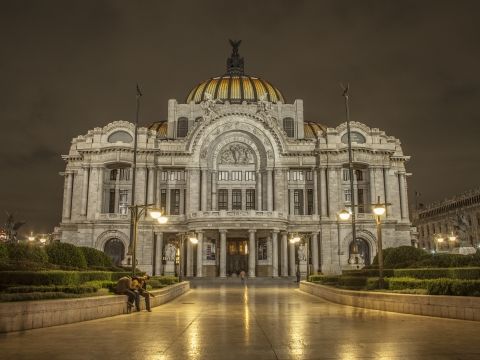 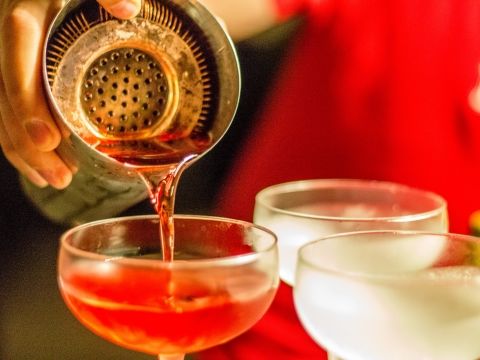 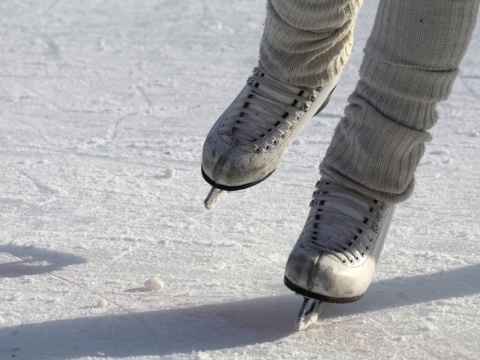 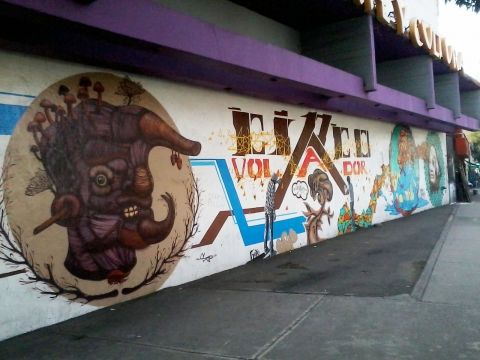 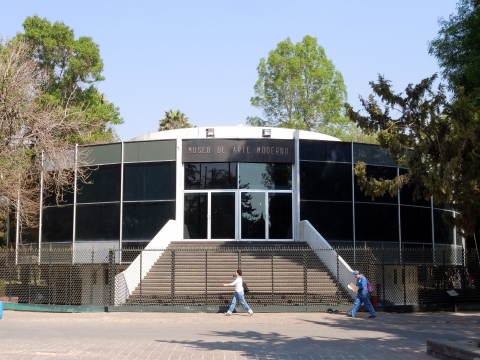 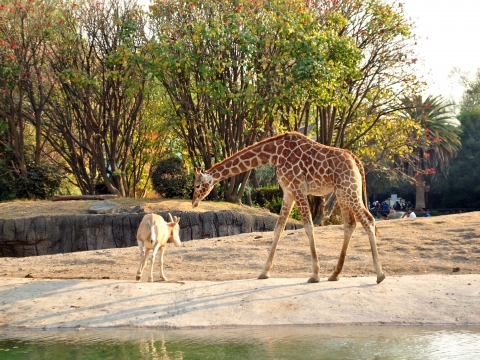 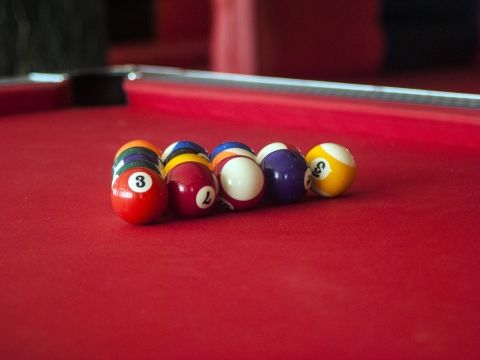