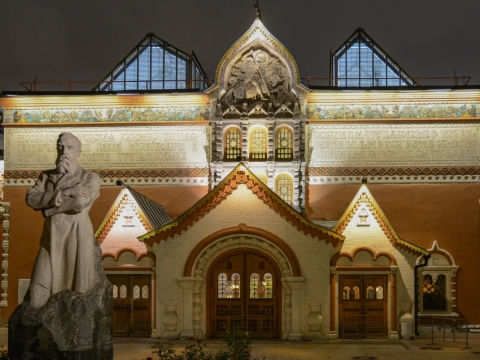 Pavel Tretiakov, the collector of some of the best work of contemporary artists in Moscow and St. Petersburg, founded this gallery in 1856. His brother Sergei collected French and Dutch masters, and in 1872 they combined their collections and opened this extremely popular museum named The State Tretyakov Gallery (Tret'iakovskaia Galereia). In 1892 it was donated to the city of Moscow and lives on with works by famous Russian painters such as Vasilii Perov, Ivan Kramskoi and Ilia Repin. 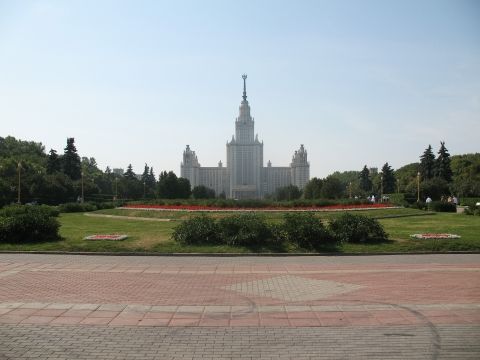 Billed to be one of the highest points of the city, the soaring Sparrow Hills lies delicately nestled along the banks of the Moskva River. Towering 220 meters (720 feet) above river level, the hill proudly watches over the dynamic, ever-evolving landscape of Moscow, including many of its landmarks like the Luzhniki Stadium, Christ the Savior Cathedral, the gleaming domes of Novodevichy Convent and the imposing Seven Sisters. Having been a muse to many Russians poets and writers in the past, the hill is crowned by an observation tower which overlooks the beautiful bend of the river shrouded by swathes of dense green scenery. Strewn across the lofty scope of the hills are buildings which are some of the most magnificent of their kind in the city, including the awe-inspiring Moscow State University complex and the picturesque Trinity Church. 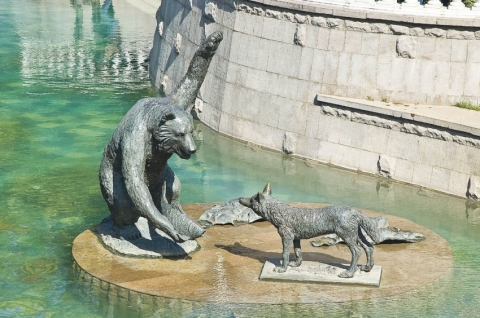 The Alexander Gardens were developed between 1820 and 1823 and run along the west wall of the Kremlin. The gardens occupy an area of about 865 meters (2838 feet). In his attempt to make the gardens as distinctive as possible, Osip Bove combined an orderly plan with the free arrangement of trees plus elements of romantic-style gardens. The gardens are bordered by decorative iron railings. Locals and foreign tourists often come to the gardens to visit the Tomb of the Unknown Soldier. Being a popular public spot, the garden is open throughout the year. 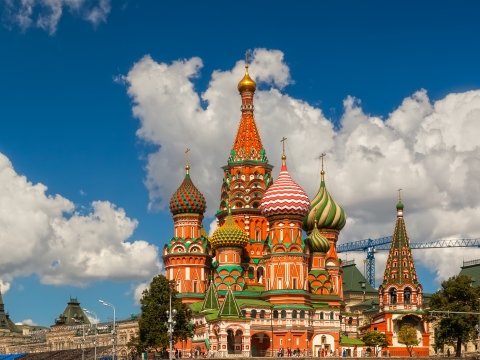 A mesmerizing collection of vivid hues and domes, St. Basil's Cathedral looms at the southern end of the Red Square, one of Russia's most widely-recognized architectural monuments. Originally built between 1555 and 1561 to commemorate the victory of Ivan IV in Kazan, the cathedral was a vision in white stone with gilded domes. The colors and patterns were not added until the 17th Century. Little is known about the architects of this majestic edifice and for a time legend had it that Ivan IV had the duo blinded to prevent them from replicating the design. Originally composed of nine chapels, a tenth was added a few years later where the tomb of Saint Basil lies. Although officially named the Cathedral of the Intercession, this historic jewel's more popular moniker derives from this. Today, St. Basil's Cathedral is a museum attracting droves of visitors each year, inspiring awe in all those who lay their eyes upon it. 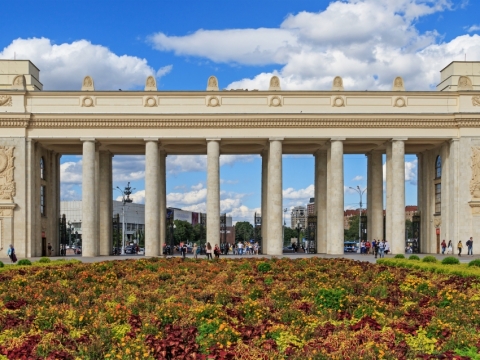 Gorky Park (referred to as Park Kul'tury i Otdykha or Park of Culture and Recreation) stretches along three kilometers of the Moskva River to the southwest of the city center. The park became known to the Western public thanks to a blockbuster movie based on Martin Cruz Smith's best-selling book, Gorky Park, and the Scorpions' famous song. Laid down in 1928, the original ornamental gardens are now accompanied by an entertainment zone, hosting everything from science lectures to rock concerts in its auditorium. 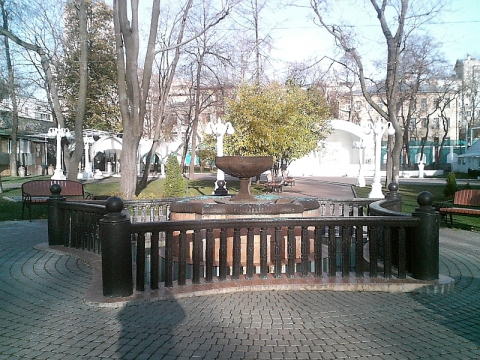 This garden lying near the north-west stretch of the Garden Ring was founded in 1892 on Karetny Ryad by the entrepreneur Yakov Schukin. The park opened in 1894 and was an immediate success with the public. Nowadays the grounds of the park accommodate three older theatres: New Opera, Sphere, and the Hermitage. A sprinkling of park furniture, flower-beds and decorative touches further enhance the park and by night it is all lit up by 19th century-style lanterns. 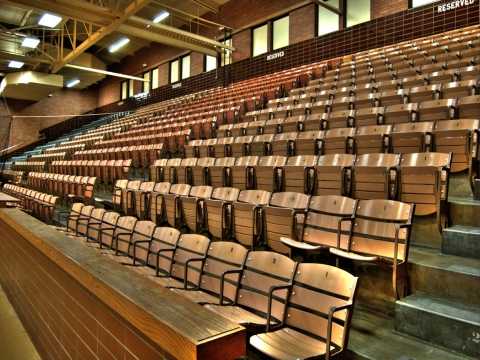 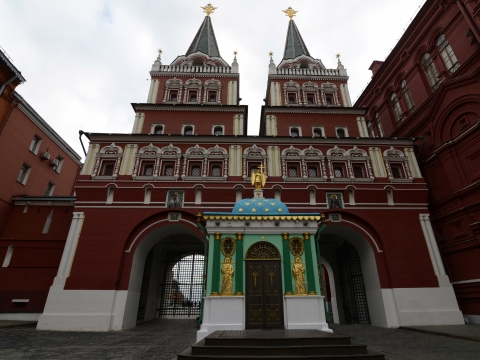 The Iberian Gate and Chapel, sometimes referred to as the Resurrection Gate, is a beautifully rebuilt entrance gateway to the Red Square and featuring classic Russian architecture. Originally constructed in 1535, it connected the stately buildings of the Moscow City Hall and State Historical Museum and has housed press chambers, a pharmacy store and the office of the Russian philosopher Nikolay Novikov in the two storey halls above it. The chapel located in front of the gates is particularly famous in Moscow for housing a copy of the miraculous icon of Virgin Mary which is believed to have magical healing powers. The small shrine is a historically important monument visited by beggars and royalty alike for worship and has been featured in writings by eminent authors like Leo Tolstoy, Marina Tsvetayeva and H.G Wells.

The Museum of the War of 1812 chronicles the events of a war that changed the course of history forever. The war was waged between the Grande Armée, lead by Napolean, and the Russian troops. The war waged for a period of six months, ending with the retreat of the French army, greatly depleted and without the satisfaction of a decisive victory, shaking the very foundation of Napolean's empire. The museum itself boasts a long history. The idea for the museum first came into being soon after the war itself, but was only inaugurated in 2012, marking the 200th anniversary of the war. Housed within a splendid brick building, the museum features a vast collection made up of weapons, documents, uniforms, sculptures, art and assorted artifacts from the war. For an intriguing glimpse into this glorious, albeit tragic, chapter of Russian and world history, be sure to pay a visit to the Museum of the War of 1812. The museum is located near the Red Square and the Kremlin walls, and is easily accessible. The museum is a part of the campus of the Exhibition Complex of the State Historical Museum. 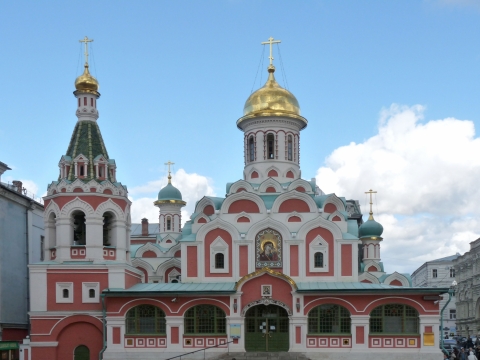 The Kazan Cathedral, located at the northernmost corner of the Red Square is a beautiful small church featuring Neoclassical Russian architecture. The current building is a recent construction from the 1990s but a wooden church is believed to have existed on the grounds since the early 17th century. The church has a very interesting history behind it as it was originally commissioned by Prince Dmitry Pozharsky to celebrate Moscow's victory of the Polish-Lithuanian Commonwealth in 1612. The small shrine was dedicated to the Lady Virgin of Kazan but was destroyed by a fire and later replaced by a sturdy brick building along with a tented bell tower. Three centuries later the church was again razed to the grounds on the orders of the Communist leader Joseph Stalin and a government office was built on its location. Today the red and green colored building is one of the most popular tourist attractions in the Red square due to its beautiful architecture and ornate interiors with statues, icons and wall paintings. Women visiting the church are advised to carry head scarves as it follows conservative Orthodox traditions. 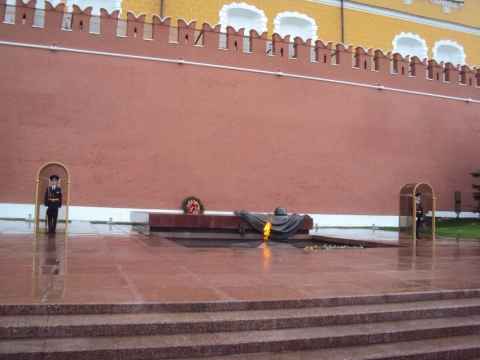 Located outside the Kremlin, adjacent to the northern corner of the walls, the Tomb of the Unknown Soldier is a burial ground and a wall memorial commemorating the army personnel who died during World War II. Mass graves of soldiers killed during the seize of Moscow in The structure consists of a large stone platform with a rectangular monument and bronze sculptures in the shape of a banner, a helmet and a bay tree branch located in the center. A large five pointed star is built into the platform in front of the sculptures and has an ever burning fire enlightening an inscription written in Russian. Red blocks containing soils from the different war torn cities of Russia in the 1940s and a red granite obelisk listing their names are also found here. A change of guard ceremony takes place at the memorial every hour and is very popular among tourists for their choreographed marching. 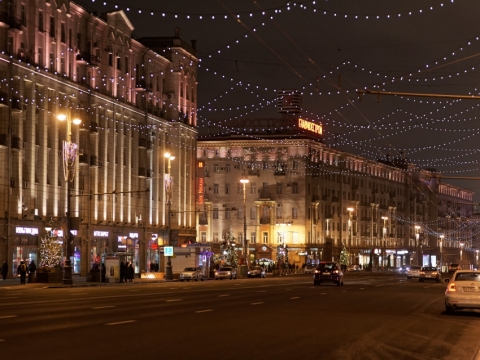 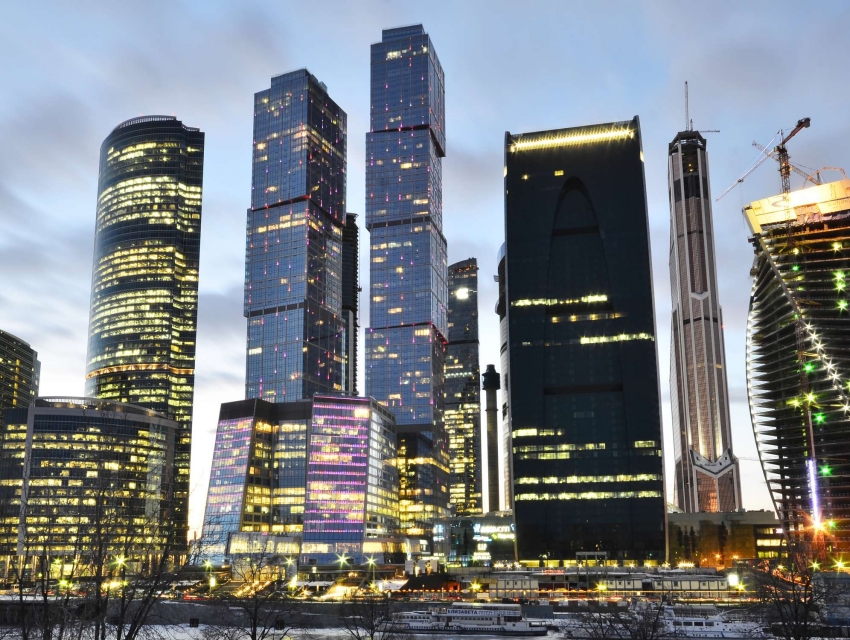 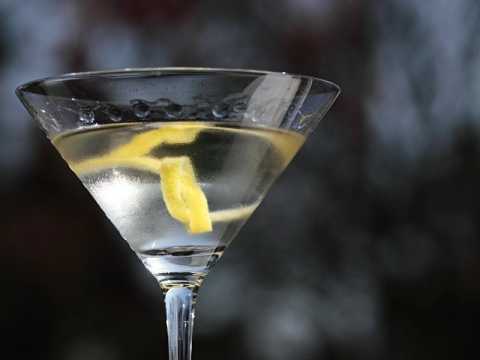 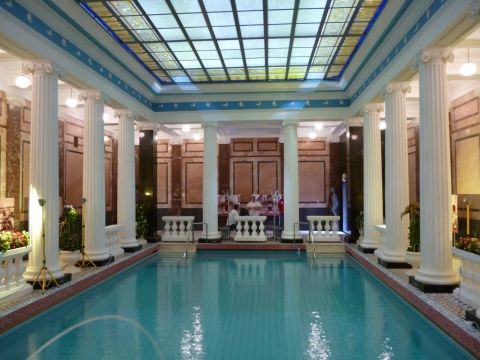 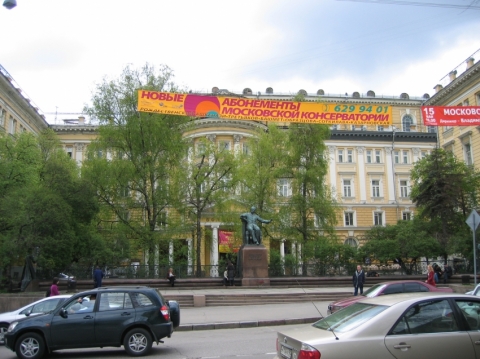 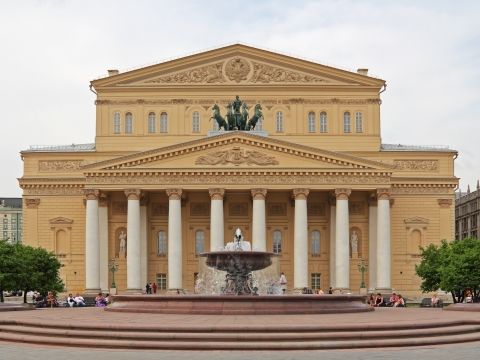