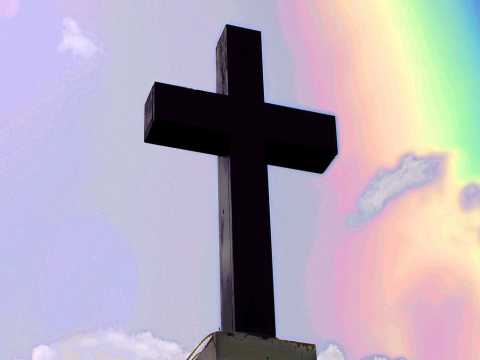 Our Lady of Lourdes Catholic Church

Our Lady of Lourdes Catholic Church is the oldest continuously used church in Minneapolis. Listed on the National Register of Historic Places, the landmark church stands in the heart of the St. Anthony Falls Historic District. The original building was constructed in 1857 as a meeting hall for the First Universalist Society. In 1877 the French Canadian Catholic community purchased the native limestone structure and the parish became the first in the United States to be named Our Lady of Lourdes. The original 3,000 square foot structure was enlarged and redesigned. A bell tower, sacristy, vestibule and rectory were added. The structural changes altered the church's architectural style. The original rectangular building became a linear French provincial-type edifice with a V-frame beam truss. Visitors take guided tours, which are available to groups by appointment, and parishioners come from all over the Twin Cities to worship. Call for schedule of services or to arrange for a tour. 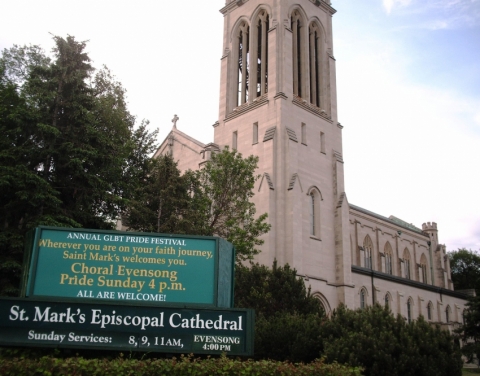 Overlooking Loring Park is the stately and splendid Episcopal Cathedral Church of St. Mark. The huge English Gothic structure asserts an almost aristocratic presence, yet offers a sense of welcome to all. A parish church, which received the designation of 'Cathedral' in 1941, it serves a congregation of over 1200. The manila-colored limestone used on the exterior was painstakingly shipped from Bedford, Indiana during construction in the early 1900s. The front façade contains a multitude of artfully sculptured figures representing the history of St. Mark's and the people who played a role in its success. Bishops, priests and missionaries, as well as symbols of the great state of Minnesota (teepees, gophers and grain elevators), are proudly displayed. The numerous stained glass windows depicting saints and heavenly scenes are truly works of art. Visit the web site for worship times and other information. 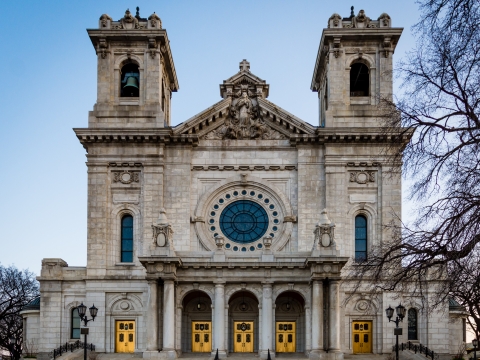 Gratis
The Basilica of Saint Mary

This grand beaux-arts church was the nation's first basilica, taking 20 years to complete. Built during the tenure of Archbishop John Ireland, the enormous white marble building is a marvel to behold. It is 120 feet wide by 278 feet long supporting 133-foot twin towers in the front. One of the towers houses a 3000-pound bell that can be heard for miles around. Over the altar, an ornate dome rises 250 feet and the 56 rank pipe organ echoes throughout. Guided tours are offered every Sunday morning. 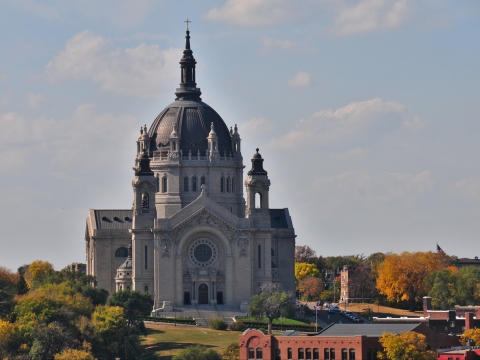 One of the country's largest and most spectacular churches, the Cathedral of St. Paul sits high on a hill (aptly known as Cathedral Hill) overlooking downtown and the Mississippi River Valley. The structure opened in 1915, although extensive interior work continued for several more years. The massive copper dome is 300 feet above the nave's floor and the walls are covered in pale Minnesota granite. A pair of carillon towers flanks the building's Summit Avenue façade and the sanctuary seats 3000 worshipers. Guided tours are offered on Monday, Wednesday and Friday at 1p.