Established in 1980, Kenai Fjords National Park protects 669,984 acres (271,133 hectares) of the coast of the Kenai Peninsula. The remote and largely inaccessible wilderness preserves one of Alaska's most spectacular swathes of land, where snow-capped mountains descend into lush forests teeming with wildlife. Over 40 glaciers flow from the Harding Icefield, carving the coast into a rippling series of fjords. Bears, coyotes, and mountain goats roam the land, while the skies are the domain of many rare species of birds. Its waters too host a variety of marine life, including sea lions, otters, and whales. The Exit Glacier is the only one of the park's many that is accessible by road, while more seasoned hikers can venture onto the Icefield. 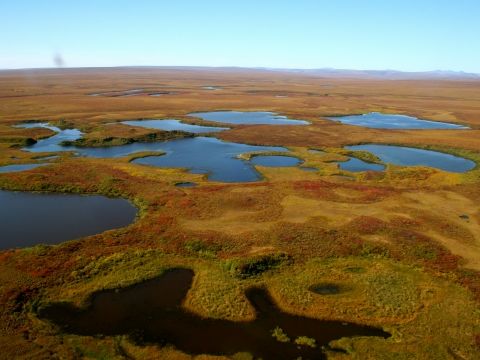 The Bering Land Bridge National Preserve protects a remnant of the Bering Land Bridge, which connected Asia with North America during the Pleistocene Ice Age nearly 13000 years ago. The preserve is one of the most remote national park areas in the United States, and includes various archaeological sites, lava flows and volcanic fields, geological curiosities like the Serpentine Tors, and natural hot springs popular with hikers. Inupiaq communities around the Seward Peninsula still practice traditional subsistence hunting and gathering.

Gratis
Gates of the Arctic National Park and Preserve