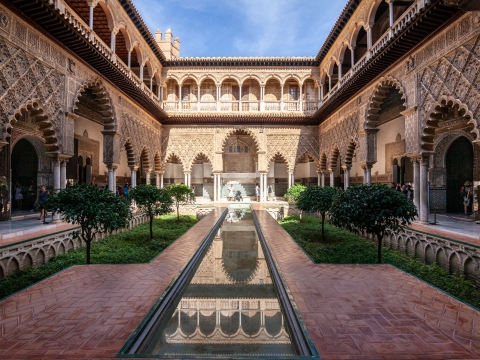 One of Spain's most striking masterpieces of Moorish-Renaissance architecture, the uniqueness of the Alcázar of Seville lies in the harmonious confluence of its architectural styles, dominated by a set of rulers who contributed to distinct additions during their respective reigns. The palace originally started out as a fortress in the 10th Century, built at the behest of Seville's Cordoban governors. Upgraded to the stately position of a palace only around the 12th Century, the Alcázar of Seville owes its astonishing Mudéjar beauty to the Almohad Caliphate that took charge of the palace. An aesthetic string of Islamic elements were added during this time, manifested in vividly meshed tiles, delicate ornamental arches, arabesque designs, and intricate geometric patterns. At the dawn of the 13th Century, the Spanish Reconquista brought about a wave of Gothic and Renaissance elements that heralded the rule of Spain's Catholic Kings. While the palace is touched by years of history that swept through its walls, some corners command more respect than others. Some of the most impressive rooms in the Alcázar of Seville are the Patio de Banderas, with the Giralda Tower forming an arresting backdrop, the Patio de las Doncellas, and the Patio de la Montería. The Salón de los Embajadores (Ambassadors' Hall) is an especially ornate addition, while the exquisite beauty of the palace spills over into its fruit-laden orchards and landscaped gardens. 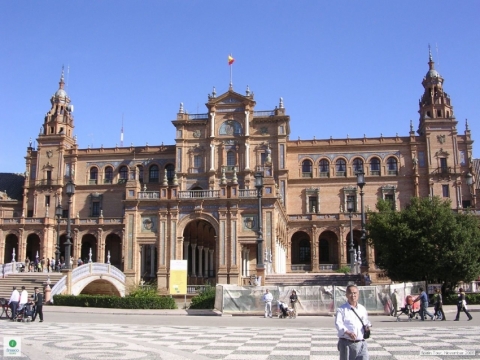 A magnificent semi-circular square that has become a symbol of the city. Along with the adjacent building it was designed by Aníbal González for Seville's 1929 Ibero-American Expo in a style that has become known as Andalusian regionalist because it employed a mixture of architectural influences from the past including Renaissance and Gothic. The most outstanding feature is the overwhelming use of exposed red brick. The inner part of the square contains a series of glazed-tile depictions of historical scenes from every province in Spain. A canal runs around the perimeter of the square where you can hire a rowing boat or motor boat for a short pleasure trip. 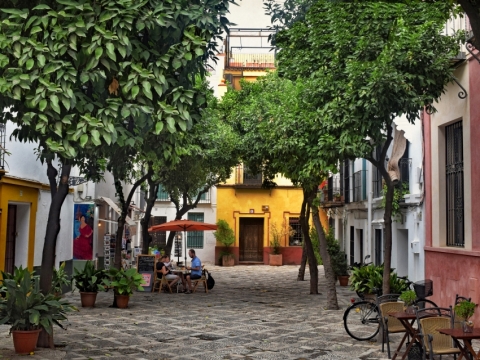 Santa Cruz is a very old, central neighborhood in Seville. It used to be the old Jewish area of town, known as the Judería. The streets here are all very narrow, winding and labyrinthine, providing ample shade from sultry Andalusian summers, and plenty of opportunities to explore. Santa Cruz is home to many picturesque little plazas, as well as easy access and views of many of the city's most beautiful and popular attractions. 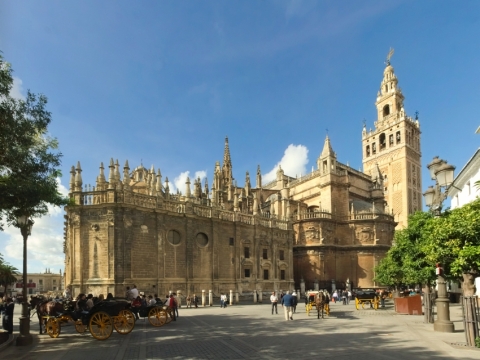 The Seville Cathedral which took almost 400 years to build, is one of Spain's largest churches, and one of the largest in the Christian world. Standing on the site of what was Seville's main mosque, one can still see elements of the Mudéjar style of art and late Gothic-style architecture. Work began in the early 15th Century, and by the time it was finished, it had five naves with a floor space measuring 116 meters x 76 meters (380 feet x 249 feet). There is an astounding number of fine paintings and sculptures inside, making a trip here a must when in Seville. 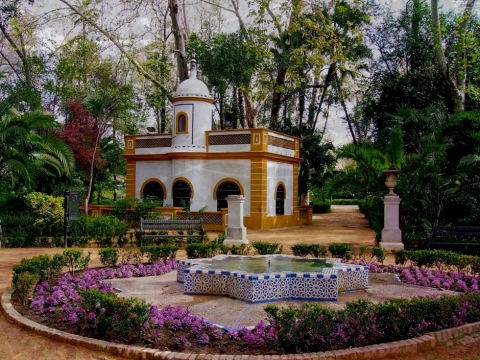 Sitting in the center of the city is a huge expanse of parkland planted with a wide variety of trees from all over the world. Maria Luisa Park is the perfect place to spend a relaxing Sunday afternoon. It has been carefully laid out with lots of space to wander among the exotic plants and numerous areas where you can sit and rest. You can rent bicycles and even take a horse-drawn carriage ride. It's named after Princess María Luisa who donated some of the land and plants from her palace gardens to start the public park. Inside, you'll find examples of all styles of architecture in the buildings erected as pavilions for Seville's 1929 Ibero-American Expo. Join one of the free guided tours given by students of the tourism school on weekends. 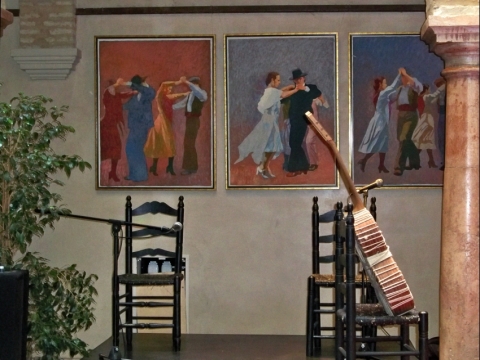 Promoted by Cristina Hoyos, the flamenco dancer, Museo Del Baile Flamenco is a flamenco dance museum that is truly unique. The museum aims to educate all those who wish to learn more about Andalusian culture and learn flamenco dancing in a systematic way. This three floored 18th century building is an architectural wonder and has different sections for a sound and image room and high tech exhibit areas, archival photos and costume displays. Conferences and cultural events with artists are organized. So learn some fabulous flamenco moves this season and bring the spirit back in your life! 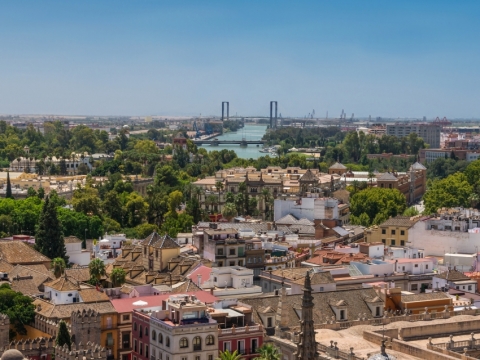 Seville's history is a whirlwind - founded by the Romans, conquered by the Caliphs and finally incorporated into the Kingdom of Castile in the 13th Century. The discovery of the Americas marked the beginning of Seville's heyday as the principal port of trade between Europe and the New World, and it is from here that the explorer, Ferdinand Magellan, began his circumnavigation of the world. Born of this varied heritage, Seville is unlike any other Spanish city; one that embraces the past but lives very much in the present. The city exudes a celebratory air, its old town the keeper of three UNESCO World Heritage Sites - the Alcazar Palace, the Cathedral of Saint Mary of the See and the General Archives of the Indies. Alongside these stand marvelous examples of Baroque and Moorish architecture down winding Medieval streets. Colorful facades front sprawling plazas, which come evening are filled with revelers hopping between tapas bars. While any reason is a good reason to celebrate in Seville, the annual Semana Santa and Feria de Abril are greatly anticipated and the most genuine of Spanish fetes. 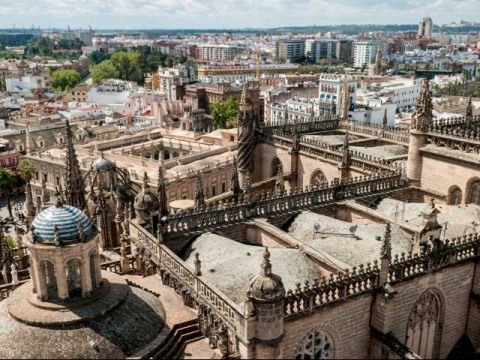 Built by 13th-century Almohad rulers of Seville to control shipping along the Guadalquivir River, this attractive tower is within easy walking distance of the cathedral, Giralda Tower and Maestranza Bullring. There are a few legends that attempt to explain why it's called Torre del Oro (The Golden Tower). One says that the gold from the New World was stored here in the 16th and 17th centuries. Another claims that the Almohads originally covered its outer walls in golden tiles. The battlements on the upper part were added in the 18th century. 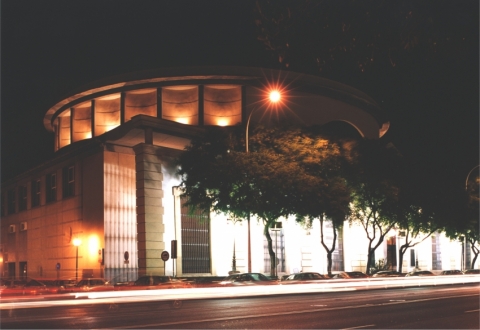 Teatro de la Maestranza is one of Spain's big three opera houses along with the Liceo in Barcelona and Teatro de la Opera in Madrid. The larger of the two auditoriums hosts the work of prestigious directors. It's home to Seville's Royal Symphony Orchestra who perform here most of the year. The whole building has been designed for easy disabled access. You'll find it by the city's bullring and close to the Torre del Oro, in an area full of good bars and restaurants.

This church is really called Señor San Jorge, but because it is a part of the Hospital de la Santa Caridad, it is better known as the Iglesia de la Caridad. It was designed by Sánchez Falconete and Leonardo Figueroa in the middle of the 17th century. The main altarpiece is the work of Bernardo Simón de Pineda, but the statues are by the sculptor Pedro Roldán, the most notable being the central group representing the Burial of Christ. The church's façade, in true Baroque style, is very simple. At the top of the façade there are tiles representing San Jorge, Santiago, "La Fe," "La Esperanza" y "La Caridad" (Faith, Hope and Charity). The church has a single nave, with a barrel vault and a small dome. The works of art inside the church were designed by Miguel de Mañara, with the aim of proclaiming that by performing Christian charity, you can achieve eternal salvation. The works on display in this church include paintings by Juan Valdés Leal called the Las Postrimerías and Bartolomé Esteban Murillo. The masses on Tuesdays and Thursdays are held in the chapel inside the Hospital. 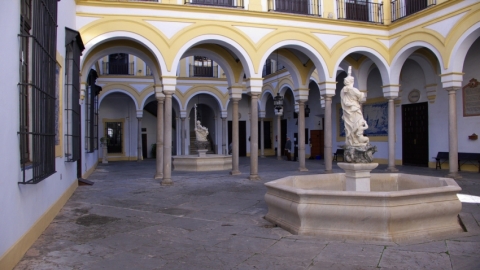 This building was founded by one of the most illustrious figures of Seville's history: Miguel Manara, who had a reputation as a womanizer and reveler, and who withdrew to a hermitage at the age of 34. He drew up rules which gave the poor and those condemned to death the right to a burial. San Jorge Church is the part of the building that can be visited. It was built between 1641 and 1721, and contains paintings by Valdes Leal and Murillo and carvings by Pedro Roldan such as the Santo Entierro. It is located just next to the crypt where the body of Manara lies. Courtyards surrounded by columns, Sevillian screens and tiles are some of the other interesting features of this building, which is now a home for the elderly. It is very near the Maestranza bullring and the historical quarter. 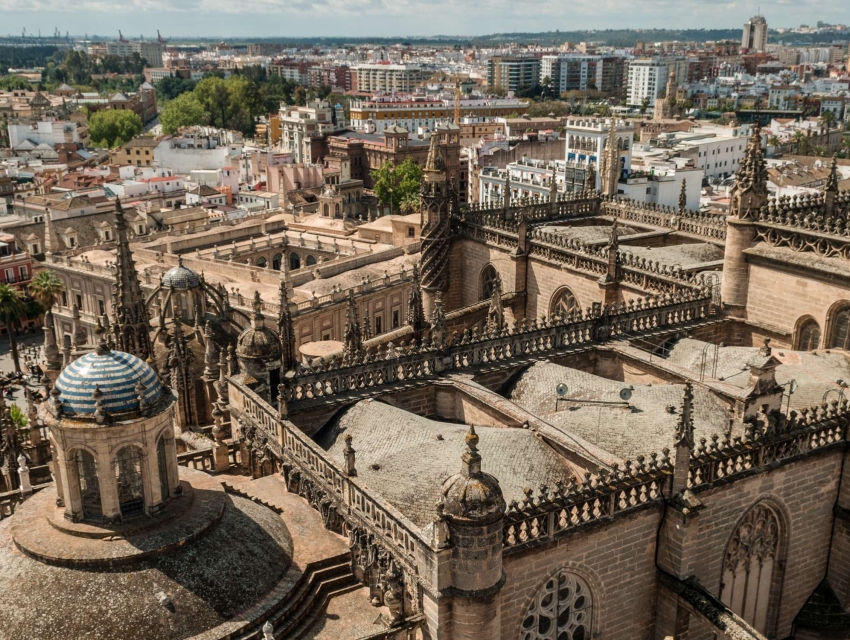 A Day in Seville 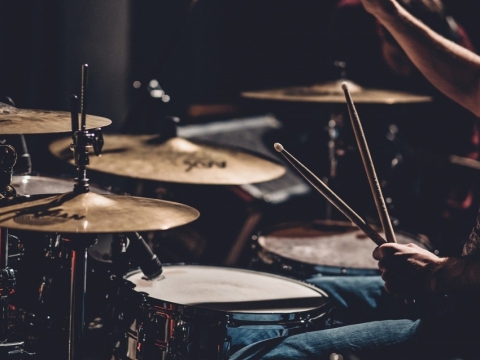 Best Clubs with DJs in Seville 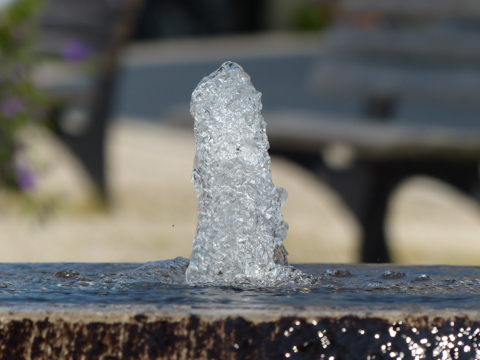 Best for Couples in Seville

Best for Kids in Seville