There are things that are more important than music, you will say. More important than dancing, talking, drinking. Are you thinking soccer? Andy's is one of a few pubs in Oslo where the real action does not happen at night, but around 4p on Saturdays and Sundays (later on some weekdays). Andy's is lively and welcoming to all soccer-lovers. The prices are reasonable and the atmosphere is just as good as that at a match. In short, Andy's is a great place to stop by if you enjoy soccer or enjoy watching people who watch soccer. Check out the website for more.

Oslo has several soccer teams, but it is only Vålerenga that is able to make people raise their voices, shake their heads in disgust, cry or laugh. Through years of scandals this working-class team has been able to come back again and again. Their fans, called "the Clan," populate a few pubs around town, Bohemen being one of them. Several TV screens make sure that everyone who has an interest in soccer is able to get a good view; the beer is cheap, and the atmosphere open and welcoming. If you want to see what real Norwegian soccer fans look like, Bohemen is the place to go. 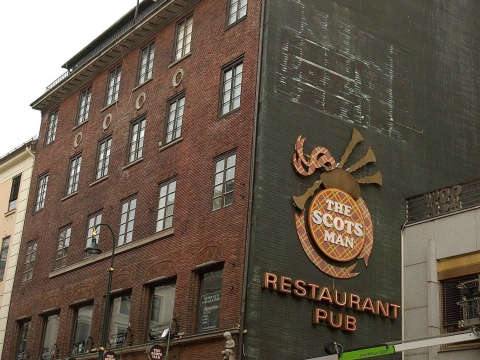 The Scotsman is almost impossible to describe. A huge Scottish bar on Oslo's main street, it is populated by party-goers from Oslo, truck drivers, sports fans and tourists, all in the warm atmosphere created by the leather furniture, wood-panelled walls and a reasonably successful Scottish interior. The Scotsman is probably the country's most famous pub, a safe starting-point for anyone who wants a beer but does not know the city. The place serves pizza, but if you are feeling hungry it is a better idea to visit the Angus Steakhouse in the cellar. Vegetarians are advised to go elsewhere to seek their food. Visit the website for further details.

Do you like soccer? Do you like Arsenal? If the answers are "yes", you will like Highbury. As the name implies, this is where fans of the London-based soccer team meet when the Gunners enter the field. You can also enjoy watching Norwegian and international soccer on a big-screen TV. Highbury has an atmosphere that soccer-lovers from all over the world will recognize and appreciate. Scarves, T-shirts and pictures accompany a wide variety of English and Norwegian beers, which are sold at average prices. Get in there early if there is an important match on.