Hair of The Dog Brewing Company

Launched in 1993, the Hair of the Dog Brewing Company displays flashes of brilliance with their small yet creative beer collection, and everyone wants a swig of it. With their claim to fame being a historic rendition of the Adambier of Dortmund, Germany (called Adam), this chill micro-brewery has been written about more times than it can keep track of. Two of the Hair of the Dog Company beers made the cut in Stanford University's list of top fine beers and has won much acclaim from beer connoisseurs. Ticketed-beer tastings are regularly arranged, for which beer enthusiasts make a straight beeline. If you happen to head early in the day to buy yourself one of their creative beers, Sprints, their in-house cook, might just provide you with some honest-to-goodness breakfast as reward for the wait which is guaranteed here.

If you're a beer lover and happen to be in Portland, for business or play, make it a point to visit Cascade Brewing Barrel House in the Buckman area. The USP at Cascade is a wonderful range of cask and barrel conditioned sour brews that are made using a huge variety of fruits, oaks and spices. They serve over 18 ever-changing beers and ales - all of course, with varied degrees of tartness that only adds to the flavor and character of these brews. There's an eclectic food menu to complement these awesome brews as well. When you do drop in, try the Saison de Garde, Sun-kissed Indian Pale Ale and Strawberry Stout, they're truly quite inspired! 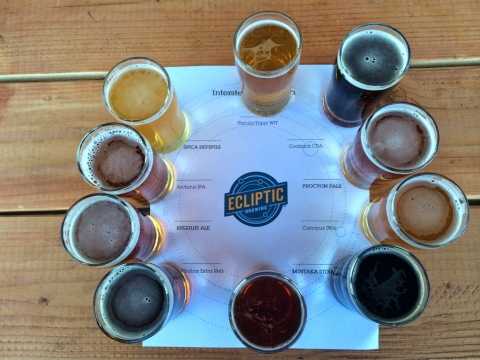 With professional brewer John Harris at the helm, the popularity and success of Ecliptic Brewing comes as no surprise. Harris named the brewery Ecliptic Brewing to reflect his interest in astronomy. Ecliptic offers around five freshly brewed beers on tap which keep on rotating so visitors are always delighted with something new. The brews range across pale ales, stouts and porters and a range of seasonal offerings. Delicious pub fare is on offer to accompany your beer.