This church was built and dedicated to St. Nicholas, the patron saint of the traveler, in 1320. Following a successful petition to Pope Innocent VIII in 1484, the church was rendered collegiate and was controlled by a warden and eight vicars. The structure itself has been repeatedly rebuilt and renovated, and the tower wasn't built until the early 1500s. These changes were partly because this church changed hands a number of times between the Catholic and the Anglican communions. St. Nicholas' Church contains fine examples of Galway's medieval stone carvings, many of which are carved on the ornate tombs. This church is also renowned as the place where Christopher Columbus offered his last prayers before his epic journey to the New World. Services still take place here each Sunday. 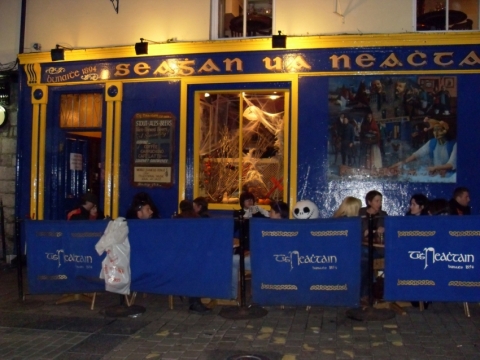 Located in the medieval quarter of Galway, this quintessentially Irish pub has a fun and fantastic atmosphere. Tigh Neachtain's is a century old family run business with a fairly regular clientele. Regulars range from the musicians who play sessions here to theater and media types to a healthy representation of Galway's gay community. Popular with visitors and locals alike, Tigh Neactain's is a great place to have a pint and a chat the night away.

The Quays Bar first got a licence to serve alcoholic beverages back in the 1600s. When you enter, it initially appears that nothing has changed since then. The welcoming atmosphere and impressive embossed wooden decor have withstood the test of time. The Quays features live music most nights, ranging from good traditional bands to more mainstream covers of contemporary music. Winner of the Traditional Irish Music Pub of the Year, this pub/venue is always buzzing, and attracts tourists and locals alike.

Monroe's hosts the best rock bands and offers a wonderful gastronomic experience. One of the popular music venues in the city, this is where some of the Galway's best upcoming bands keep the crown alive with their music. Apart from good music, Monroe's is also known for its many local specialties, tasty beers and an atmosphere that's filled with excitement. A real must for rock and good food lovers.