This intimate music venue features blues, soul and rock and roll acts from around Southern California. Seating just 85, music fans get up close with the bands. The bar/music venue was one of the first businesses to take a chance on what would become the renovated Gaslamp District, and has built up a loyal following over the years with music every night. There is no cover charge Sunday-Thursday; $3 Friday-Saturday from 8p-9p; $5 after 9p. 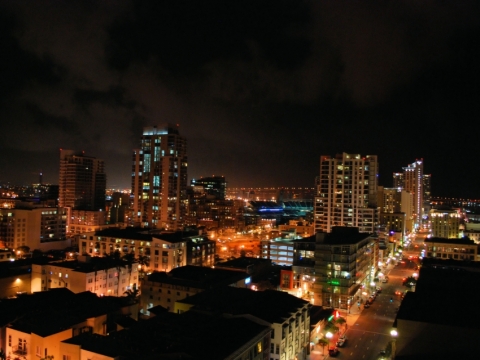 For a dose of live music while having your local American grub, head to Whiskey Girl. The club resembles Hard Rock Cafe with its set of nightly bands performing with enough vigor to make you sit back, tap your feet and clap for every song asking for more. The odd nights also have DJs spinning some fine tunes from their collection. There are ample televisions to keep you entertained with ongoing sports matches if the music isn't of your liking. The American cuisine dominated menu features an array of burgers, sandwiches, salads, classic pub appetizers, pizza and more. Their Sunday brunch is also noteworthy!

Featuring cutting edge live music, this is a popular hot spot in Old Town San Diego. In fact, when this place was known as Spirit Club, it hosted the then-unknown band called R.E.M. The stage continues to seek talent in rock, blues and alternative modes of music to provide live entertainment for San Diego locals and tourists. With a varying entertainment schedule, guests are advised to call for previews of upcoming entertainment on the telephone hotline. A full cash bar is available.