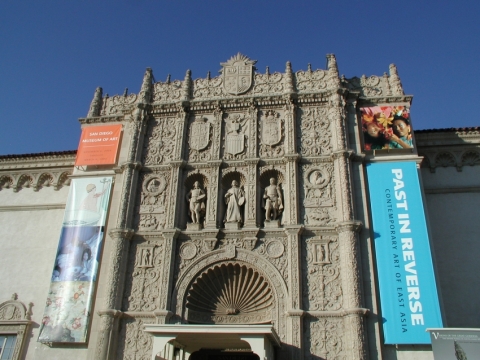 The San Diego Museum of Art is the region’s oldest, largest, and most visited art museum, providing a rich and diverse cultural experience for nearly 300,000 visitors each year. Located in the heart of beautiful Balboa Park, the museum’s nationally renowned permanent collection includes Spanish and Italian old masters, South Asian paintings, and 19th and 20th Century American paintings and sculptures. In addition, the museum regularly features major exhibitions from around the world, as well as an extensive year-round schedule of supporting cultural and educational programs for children and adults. Exhibition text is always in English and Spanish. The Museum’s research library offers access to an extensive collection of art history publications.

Located in Santee, Creation and Earth History Museum seeks to establish proof of Young Earth creationism. The museum offers guided tours and displays interesting sights, including models of Noah's Ark and Tower of Babel, an imagined walk through the Garden of Eden and an Ice Age room, among many such other depictions. The museum's, through its displays, provides an alternative view, and therefore should be visited to see how it executes its perspective.