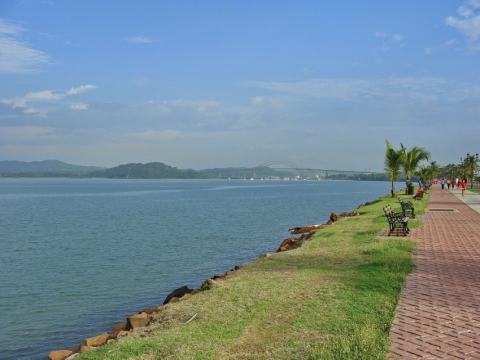 The construction of the Panama Canal demanded a whole lot more than just digging a really long trench—the engineering required manipulation of an entire geographical system. To calm the ocean waves around the Pacific entrance to the Canal, a colossal breakwater was constructed, that reaches out to the sea, connecting three islands along the way. After its construction in the early 20th century, Fort Grant was established here in 1913, and the area was militarized and fortified by the United States during the World Wars. It was entirely off-limits to Panamanians until 1999, when the zone was finally officially returned to Panama. A road and sidewalk running along the top of this breakwater are the thoroughfares of the Amador Causeway, a great stretch of road for walking, jogging, biking, and especially for the phenomenal views over the Bay of Panama to the city beyond. Because of the heat on the un-shaded road, daytime activity is mostly confined to a few restaurants that make the most of the panorama, along with sightings of boats and brown pelicans, and a smattering of scintillating resorts. Come evening, a bevy of restaurants that double as nightlife spots open on each of the three islands that make up the Calzada. A teeming hive of activities, this waterside avenue hosts a range of attractions including the Centro Artesanal Market, the futuristic Biomuseo and the Punta Culebra Nature Center - which chronicles Panama’s natural heritage - and many others. 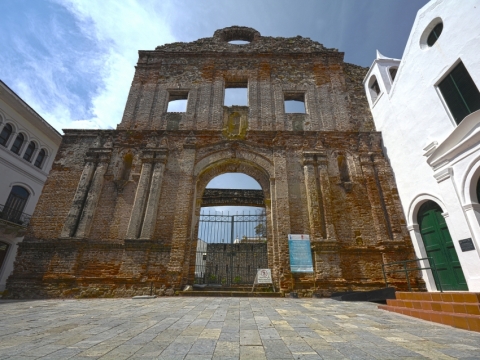 A truly beautiful wall standing along one of the charming streets of Casco Viejo, sprouting a few weeds from the uneven top of its brickwork, is the surviving façade of the colonial Convento de Santo Domingo. The 17th-century church and monastery were burnt to the ground twice and not rebuilt after 1756, so that little was preserved through the centuries except the front of the building and an archway within it. Known as the Arco Chato, this brick arch eventually became pivotal to development in Panama. Its survival despite a remarkably precarious construction proved to engineers that an interoceanic canal built in Panama would not be destroyed by earthquakes; the rest is history. 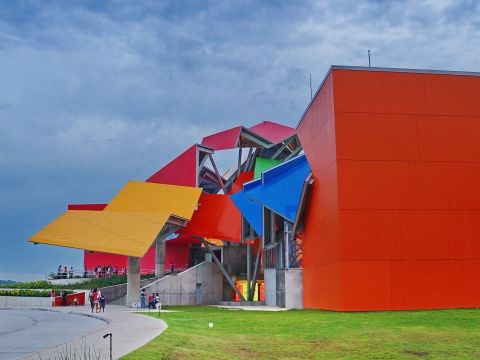 Nestled in Panama City, Biomuseo deftly chronicles the natural, cultural and ecological heritage of the country. The labor of love of eminent architect Frank Gehry, the museum boasts a futuristic facade, while the main building has an equally innovative and distinctive design, which is billed to be the only one of its kind in Latin America. Here, a wide arsenal of buildings, galleries, exhibits and artifacts together, illustrate some of the country’s most pressing aspects including its dynamic biodiversity, the evolution of the Pacific and the Caribbean, the country’s cultural and communal legacy, as well as the importance of the Isthmus of Panama, which has been an integral catalyst in carving out the landscape of the country. A wonderland for science aficionados and nature lovers alike, this elaborate museum is educational and inspirational in equal amounts. Its frontage enlivened by splashes of solid blues, yellows and reds, the cutting-edge Biomuseo is one of the major tourist draws, and contemporary landmarks of the city. 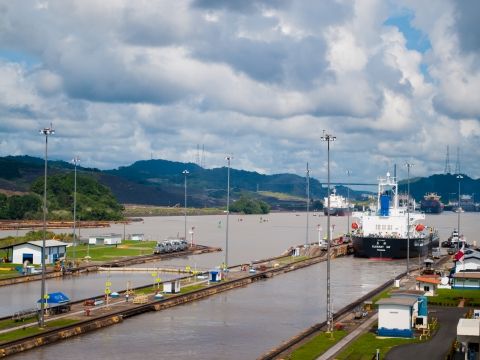 A legend of human struggle, a marvel of economics and a daily triumph of engineering, the Panama Canal is a captivating story, as well as an awe-inspiring system to watch at work. The tale of the effort to connect two oceans began in 1539, when the first Spanish team studied the feasibility of such a project, and in 1880, the French began actually attempting the construction. After several workers perished during the course of construction, the canal was abandoned until the United States bought control of the zone in 1903. After completion in 1914, it stretched 48 miles (77 kilometers) between the coasts, and today about 13,000 ships representing 5% of global maritime trade pass through the canal each year. Ships around the world are built to fit smoothly through the three locks that function like enormous steps over the isthmus, and pay a fee according to weight to make the 8- to 10-hour transit. The record for the heaviest ship to pass through the canal is frequently redefined, but the smallest fee was paid in 1928, when Richard Halliburton swam through for PAB0.36. 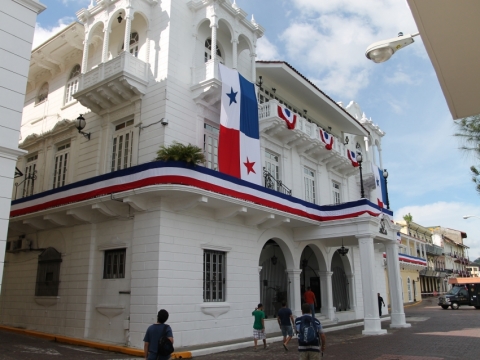 The presidential palace in the oldest existing neighborhood of Panama City, with its neoclassical architecture and unsurpassed views directly over the Bay of Panama, is popularly known for its pets. In the early 20th century, President Belisario started the tradition of keeping pet herons and egrets in the Moorish interior courtyard of the Spanish colonial mansion. The same president commissioned the 1922 renovation of the 1673 building, originally built for the Spanish crown, to its current appearance. It was put to good use in the interim as the Royal Customs House in the 18th century and a government house in the 19th century, and the President now resides upstairs with the executive offices on the ground floor. Expect to show identification at either end of the guarded street if you'd like to walk past the front of the building because the beautiful birds in their Palacio require very tight security. 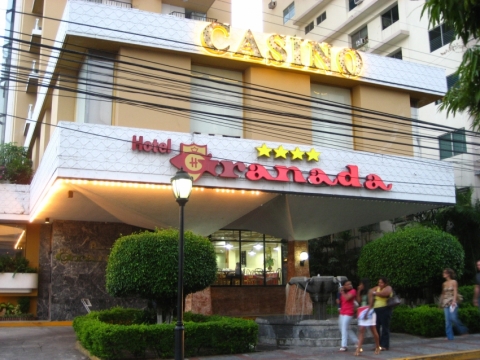 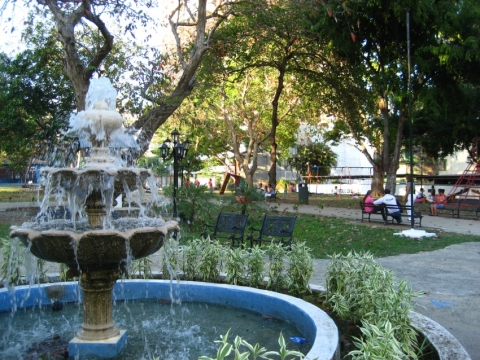 Jutting off the commercial strip of Vía Argentina in El Cangrejo is a grassy little haven known as the Parque Andrés Bello, a gift from Venezuela to Panamá from 1965. Quintessential park scenes of fun and romance are encouraged by the colorful play structures and the attractive wrought-iron benches scattered around the walking paths. A small monument to Andrés Bello, a Venezuelan-born poet, philosopher, legal scholar, and educator who wrote the Civil Code for Chile, stands at the center of the park. 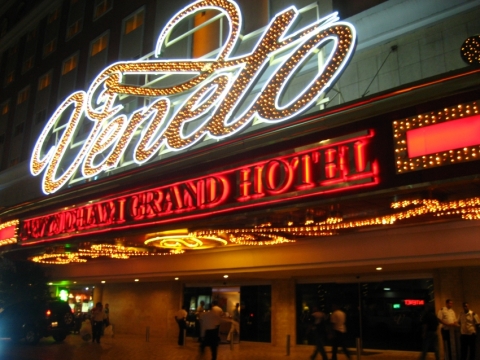 Proud to be a Wyndham Grand Hotel, the extravagantly lit sign over the entrance to Veneto blazes with rufous swirls, while the sidewalk in front bustles with helpful staff and guests reveling in the luxury of it all. Centrally located in the banking and financial district of the city and only 20 minutes from the airport, Veneto offers more than just the expected amenities. Along with bathrobes, newspaper, and movies in the bedrooms, 24-hour room service allows 17 floors of guests to enjoy spectacular views while they eat; relax in the executive lounge or shmooze at the social hour on the concierge floor; a full service spa, Las Vegas-style casino, and health club are located on the premises; all rooms are non-smoking, and children stay for free. 18 suites are among the hundreds of snappily decorated red, black, and white rooms. 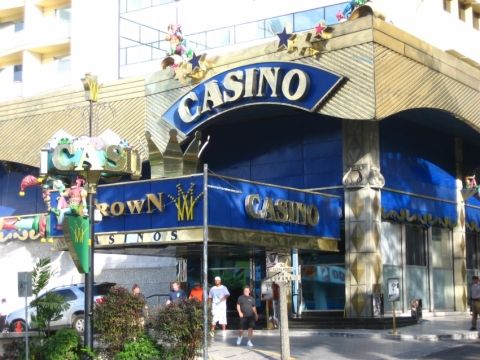 Offering slot machines, card tables, and super service, Crown Casinos makes its appearance as a carnival of gaming in downtown Panama City. A daily "Happy Hour" starting at 5p and leisurely winding up at 10p keeps patrons pleased with outrageously low-priced mixed drinks. A slightly more casual atmosphere than many other casinos means that people-watchers should be alert for some silly behavior as the evening marches on—especially interactions with the mirrored walls. 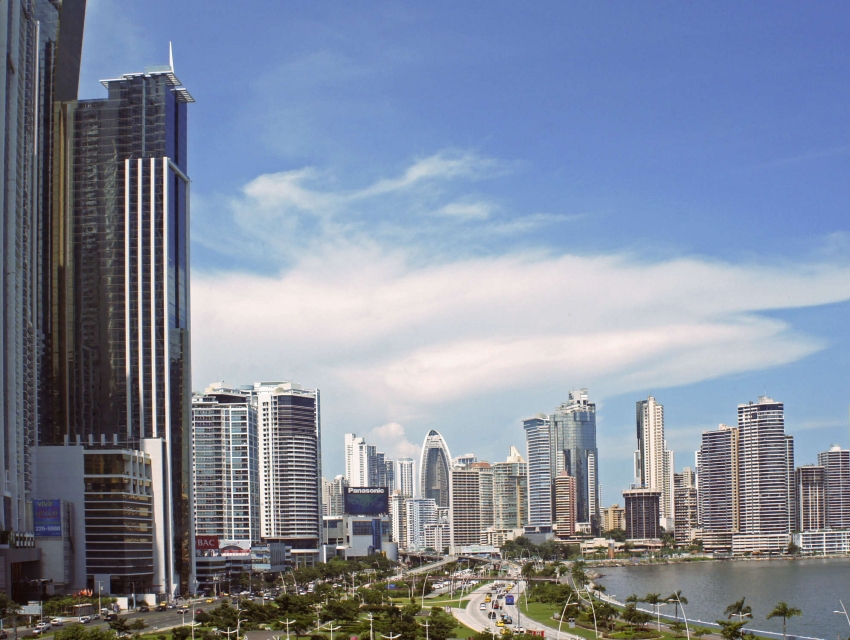 A Day in Panama City

Top Things To Do in Panama City